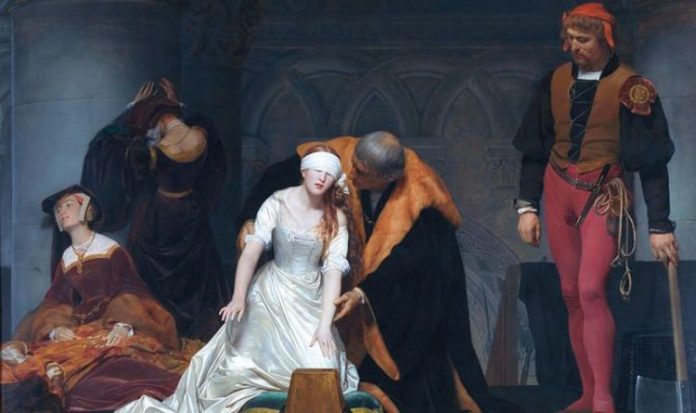 This weekend marks the anniversary of Lady Jane Grey’s execution, almost 500 years ago. The great-granddaughter of Henry VII, the devoutly protestant Jane was proclaimed Queen after King Edward VI’s death in 1553. Less than a fortnight later, she had been deposed as Edward’s catholic half-sister, Mary, seized the throne. Jane’s legacy has taken various guises over the centuries, with Helena Bonham Carter playing the doomed royal in a famous 1986 film adaptation. Jane’s story is a tragedy and has been remembered as such: a vulnerable 16-year-old thrust into a position she did not seek, who was subjected to a brutal public death. But research by leading royal historian Leanda de Lisle exposes a letter intended to obscure the significance of her reign.

She writes: “A 16th-century merchant gave us what was believed, until now, to be the only detailed, contemporary description of Jane’s appearance.

“In a letter, he wrote an eyewitness account of a ‘smiling, red-haired girl’ being processed to the Tower as Queen, on July 10, 1553.

“He was close enough to see that she was so small she had to wear stacked shoes or ‘chopines’ to give her height.

“The letter is an invention that obscures the significance of her reign.”

The author of ‘Tudor: The Family Story’ and ‘The Sisters Who Would be Queen, the Tragedy of Mary, Katherine and Lady Jane Grey’ explained how the faked letter built on the Victorian romanticisation of the young Queen.

From there, Jane’s reputation spiralled and the faked letter Ms de Lisle refers to made its first appearance in Richard Patrick Boyle Davey’s 1909 biography of the doomed monarch.

Ms de Lisle continues: “The letter, ‘discovered’ by Davey in the archives of Genoa, seemingly brought this tragic heroine to life.

“But in retrospect that should have sent alarm bells ringing, for the Jane the Victorians knew was already heavily fictionalised.

“By the 19th century Jane’s fictionalised life was enormously popular ‒ but there was something still missing from her story: a face.

“With no contemporary images or descriptions, the public had to be content with Jane as imagined by artists.

“Richard Davey seems to have spotted a need for an account of Jane’s appearance that matches its power.

“He claimed to have found it in a letter in Genoa, composed by the merchant, ‘Sir Baptist Spinola’.

“The letter has been quoted in biographies ever since and used to argue the merits of ‘lost’ portraits of Jane.”

But Ms de Lisle says she saw through this, and found herself concerned that Mr Davey was the sole source for the letter.

While working on her triple biography, The Sisters Who Would be Queen, she discovered Mr Davey had invented evidence that Jane had a nanny and dresser with her in the Tower of London.

Ms de Lisle then “began a long search for the ‘Spinola’ letter” but never found it, neither in Genoa nor in any historical account before 1909.

She concludes: “It became clear the letter is a fake that mixes details from contemporary sources, with fiction.

“The description of Jane has echoes of the red-lipped girl in the Delaroche portrait, but resembles also a contemporary description of Mary Tudor, who was ‘of low stature…very thin; and her hair reddish.’

“Jane’s mother carries her train in the letter, as was observed in 1553.

“The platform shoes or ‘chopines’ were taken from the Victorian historian Agnes Strickland, quoting Isaac D’Israeli. I can find no earlier source.

“The rest of Jane’s dress, described by Spinola as a gown of green velvet worn with a white headdress, was in colours traditionally worn by a monarch on the eve of their coronation.

“Davey’s lies and the repetition of old myths are damaging. Because Jane’s reign was treated for so long as the product of the ambitions of a few men, or of Edward VI’s naïve hopes, it is regarded as a brief hiatus, of no consequence.

“But it is key to understanding the development of our constitutional history.  And we have overlooked something else. The Tudor unease with women who hold power has never really gone away.”

Jane, who has gone down in history as the ‘Nine Days’ Queen’, was highly intelligent and tipped by many to make a good Queen consort to Edward VI before his early death.

When Mary Tudor overthrew Jane, she was tried for treason, found guilty and condemned.

Mary initially suggested she wished to pardon Jane but was persuaded by the Bishop of Winchester that the teenager was a threat due to her influence over would-be protestant rebels.

From the scaffold, Jane argued that while in law she was a traitor, she had merely accepted the throne she was offered.