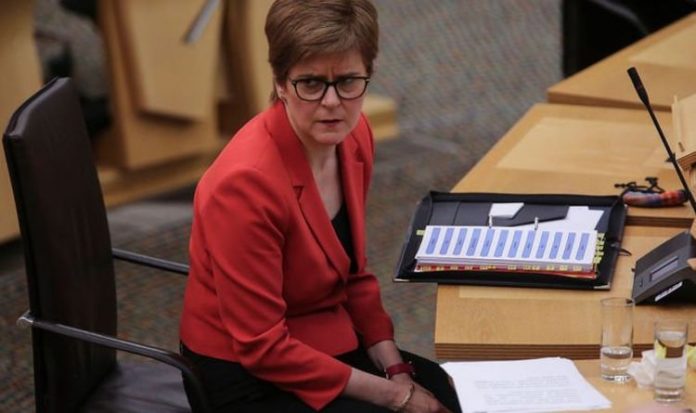 The Stable Bar and Restaurant at Mortonhall, Edinburgh, has been attacked online after the First Minister was snapped maskless while chatting to three women. Ms Sturgeon, who was attending a wake, has apologised and said she had “no excuses” for the breach reported in The Scottish Sun.

Under laws passed by the SNP, it is illegal in Scotland to not wear a mask in a pub or bar – unless you are sitting at a table.

The pub’s owners, Iain and Fiona Dempster, have found the online abuse particularly upsetting given the difficult period for the hospitality industry.

Speaking to The National, Mr Dempster, an independent supporter, said the picture was taken by a “random customer”, while another staff member described the photographer as a “chancer”.

Mr Dempster said the customer had “no care for the consequences and backlash for a family-run business or its hard-working staff during this horrendous time for hospitality”.

As stated by Schedule 7 of Scotland’s Health Protection (coronavirus) regulations, it is a “requirement to wear face coverings in certain indoor places”, including pubs and restaurants.

The only exception is if you are “seated at a table” which the first minister was not.

Breaches of these rules can result in a fine of £60, though this is lowered to £30 if paid within 28 days.

Police said they would not be taking any action against the First Minister after she broke her own Covid-19 laws.

Police Scotland said Ms Sturgeon had “acknowledged this inadvertent breach” of the rules.

She told MSPs at Holyrood of “how sorry” she was of regulations “I ask all of us to follow”.

Ms Sturgeon said: “I want to be clear that regardless of the circumstances, I was in the wrong.

“There are no excuses.

“These rules do apply to me, just as they do to everyone else, and the rules really matter.

“I am kicking myself very hard – possibly harder than my worst critic ever could – but more importantly I’ll be making sure I don’t drop my guard again.”

On September 10, Ms Sturgeon announced the compulsory wearing of face coverings in bars, cafes and restaurants.

She told a media briefing four days later: “It is now mandatory for customers in those settings to wear face coverings when they are not eating or drinking.

“For example, when you go into the premises and go to your table, or when you stand up to move around to go to the bathroom.”