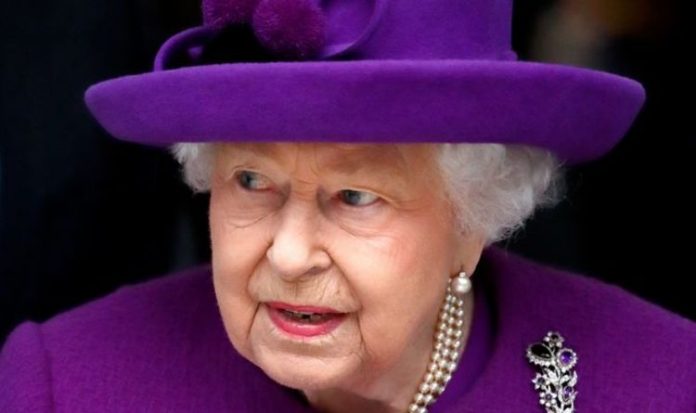 Royal commentators Chris Ship and Lizzie Robinson reflected on Meghan Markle and Prince Harry having their royal titles stripped. During their show, the Royal Rota, Ms Robinson insisted the Queen’s statement reiterated the royal couple could not have one foot in the Royal Family. She remarked the Queen had made it clear the pair “could not have their cake and eat it too”.

She said: “I think we said last week that Meghan and Harry had made it clear that they wanted to continue to fulfil their roles.

“But the Queen has made it quite clear from the moment they wanted to step away as working members of the Royal Family that it is impossible to have one foot out and one foot in.

“You are either in and you are serving the Royal Family or you are out.

“Harry and Meghan have made it clear that they want to be out and pursue a life of big deals with Spotify and Netflix and sit down interviews with Oprah.

DON’T MISS: Prince Harry told he ‘made fool of himself’ in ‘puerile’ TV interview

“They can’t have their cake and eat it too.”

Mr Ship argued it was likely that the Sussexes and the Palace parted ways acrimoniously.

He added a reason for this could have been the late revelation Meghan and Harry would be interviewed by Oprah.

He said: “Our understanding of how last week unfolded is that it was on Monday that we revealed the Oprah Winfrey interview and therefore the final negotiations between Team Sussex and Buckingham Palace were kind of sullied.

The source said: “Harry has spoken to the Queen, and she told him she was delighted he has found happiness.

“She only wants the best for him and his family.

“She has seen him struggle with his position in the family and had always had a great deal of affection and sympathy for him.”