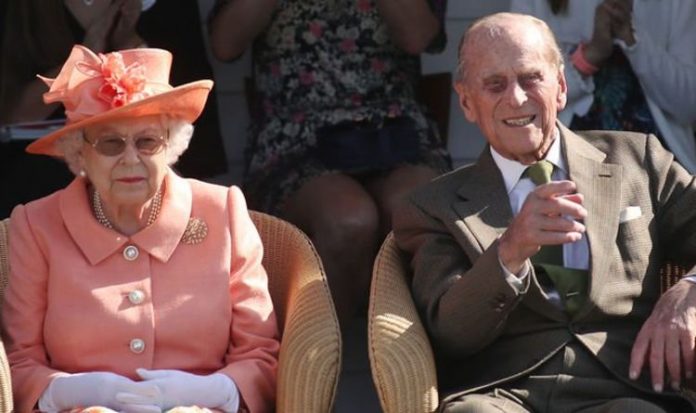 Ingrid Seward, a royal author and editor-in-chief of Majesty magazine, claimed the monarch was involved in a row with Philip in 1954. The Queen and her husband have been suggested to have had their fair share of dust-ups behind the palace doors, with multiple reports claiming Phillip can be ‘very tough’ on the monarch.

The 1954 argument came as the Queen and Phillip were visiting Australia on a state visit.

Lasting for eight weeks, an Australian film crew managed to spot the couple in a heated moment outside of their royal chalet.

Ms Seward wrote in her book ‘Prince Phillip Revealed’ that Phillip stormed out of the building, shortly followed by the Queen.

She wrote: “A camera operator was horrified to see Philip charging out of the couple’s chalet, followed by a flying pair of tennis shoes and a racket and a very angry queen shouting for him to come back.

“Then the indignant queen grabbed hold of her husband and dragged him back inside.”

READ MORE: Prince Philip exposed for ‘scary’ demeanour – ‘How can anyone be so rude!’

After the row, the camera crew waited outside for the monarch to reemerge and stopped filming.

Richard Colville, royal press secretary at the time, then approached the film crew ordering them to hand over the footage, which they agreed to do so.

The Queen said after reappearing: “I’m sorry for that little interlude but, as you know, it happens in every marriage.

Ms Seward also wrote that Philip was at times “very tough” on the Queen.

But the Queen reportedly “seldom replied but changed the subject and began to speak in riddles that would distract him as he tried to figure out what she was talking about”.

Sarah Bradford also wrote about the Queen’s rows with Philip in her book ‘Queen Elizabeth II: Her Life in Our Times’

The American writer Susan Crossland was quoted by Ms Bradford in her book when describing how the couple had a row on their royal tour of the US in 1976.

The book says: “On one occasion when Philip was sounding off about something, the Queen said to him quite sharply, ‘Oh Philip, do shut up.’

“‘You don’t know what you’re talking about’.”

The insider added it could be a sign that the monarch and Phillip have a positive relationship.

They added to Mr Whitaker that Philip may be the only person who could speak candidly with Queen, and suggested that while the monarch leads them in public, the Duke reportedly wears the pants in the family when they are at home.

Mr Whitaker’s source then said: “For the Queen herself, when you consider she is surrounded by a lot of yes men, actually having a man in her life who tells her what he thinks of what she’s doing is probably a refreshing change.”

The Queen and Philip are currently self-isolating in Windsor Castle while they celebrate their 73rd anniversary.