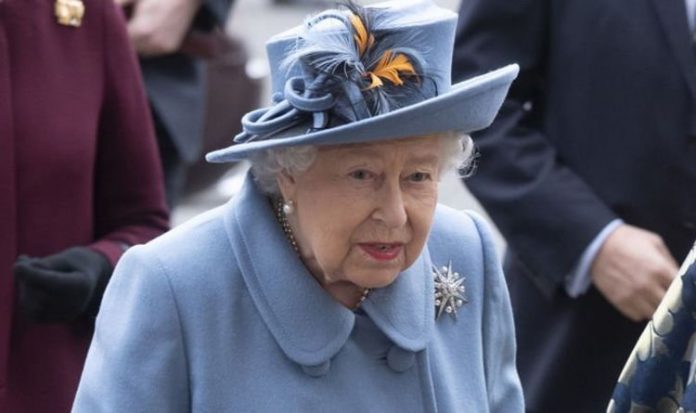 The Queen, 94, and Prince Philip, 99, will spend Christmas just as a couple at Windsor Castle after deciding to enjoy the festive period “quietly” due to the coronavirus pandemic. Her Majesty and Philip normally host their large family at Sandringham in Norfolk over the holidays and are watched by crowds as they attend church on Christmas Day. ITV’s Royal Rota hosts Chris Ship and Lizzie Robinson discussed why the Queen moved her Christmases to Sandringham.

Mr Ship said: “The Queen has been at Sandringham for Christmas every year since 1988 and she was last at Windsor in 1987 and she moved it to Sandringham because there was a huge rewiring of Windsor so it was moved.”

Ms Robinson added: “Sandringham means a lot to the Queen.

“She traditionally stays at Sandringham until February 6 which is the date her father died in 1952.”

The Queen and her consort, who are both in their 90s, are expected to see some members of their family briefly in accordance with guidelines but Christmas celebrations are likely to involve just the couple.

It is understood the Queen will not be attending church on Christmas Day to avoid large crowds of well-wishers gathering.

A Buckingham Palace spokeswoman said: “Having considered all the appropriate advice, the Queen and the Duke of Edinburgh have decided that this year they will spend Christmas quietly in Windsor.”

The Prince of Wales and the Duchess of Cornwall will spend Christmas Day at Highgrove, their Gloucestershire home, but are expected to see the Queen and Philip at Windsor over the holidays, with Camilla also visiting her family.

It is not known where the Duke and Duchess of Cambridge will celebrate the festive period but they may, as they have in the past, spend it with Kate’s parents who live in the same county as the Queen in the Berkshire village of Bucklebury.

The restrictions also mean the Queen will not be able to host her traditional pre-Christmas lunch at Buckingham Palace when the wider royal family usually gathers each year for a get-together a week or so before Christmas.

The Queen and duke are fortunate to have enjoyed large Christmas gatherings in the past but they are also aware family members will have competing demands on their time over the festive period and are content to enjoy the period quietly.

Last year, those joining the monarch in Norfolk included Charles and Camilla, William and Kate, Prince George, Princess Charlotte and Prince Louis, the Duke of York, Princess Beatrice and her then fiance Edoardo Mapelli Mozzi, the Princess Royal and the Earl and Countess of Wessex.

The couple have spent much of the lockdown at Windsor Castle being looked after by a reduced number of staff dubbed HMS Bubble.