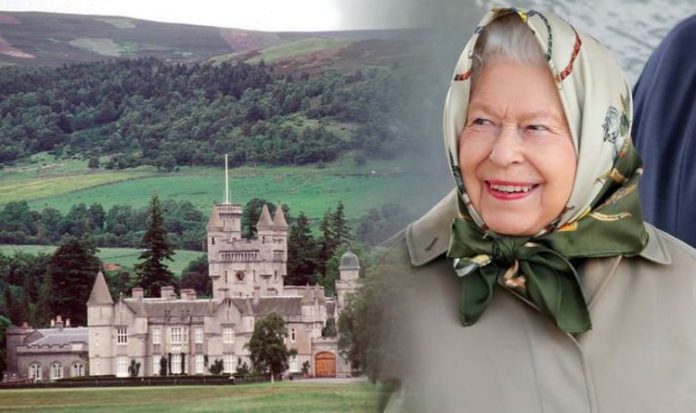 Every year the Queen visits her Balmoral estate in Scotland, and despite the coronavirus pandemic this year has been no exception. The Queen, 94, and Prince Philip, 99, arrived at Balmoral on Tuesday last week, and they are expected to remain there until early October.

The Queen and Prince Philip are known to love Balmoral for its beautiful rural surroundings.

Every year the Queen visits, and various members of her family also come up to spend a week with the monarch over the summer months.

With Balmoral’s beautiful highland backdrop, the Queen spends most of her time outdoors during her stay, going on hikes with her dogs or horse riding.

READ MORE: Queen’s last words to Prince Harry before he stepped back

Mr Johnson will be taking a trip to Scotland with Carrie and their baby son Wilfred later this month, according to The Mail on Sunday.

However the family will not be dropping by to see the Queen while making his visit, as the Queen is staying in a “bubble” at Balmoral.

Along with the absence of her PM this year, the pandemic has also affected the Queen’s Scottish holiday in other ways.

A Buckingham Palace spokesman previously said arrangements for the Queen’s stay in Scotland “will be in line with the relevant guidelines and advice”.

This has meant a reduced team of staff are currently looking after the Queen and Prince Philip, all of whom isolated for two weeks prior to her arrival in Scotland.

The Queen also usually attends Crathie Kirk while in Scotland, as it is a regular place of worship for the Royal Family when they are in residence at the estate.

In Scotland churches are among the places subject to rules allowing communal prayer for a maximum of 50 people, with two-metre social distancing in place.

But over the weekend the Queen did not attend church, so as not to attract any crowds with her visit.