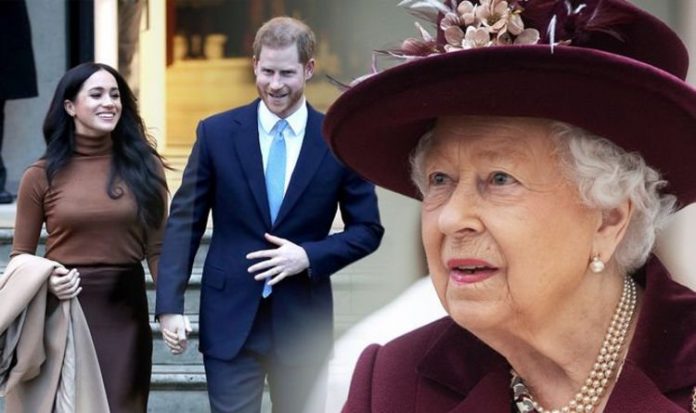 The Queen, 94, and Prince Philip, 99, were forced to step in and stop Meghan Markle and Prince Harry form marketing themselves while simultaneously being senior royals. Speaking on the Channel 5 documentary, ‘Meghan & Harry: The New Revelations’, royal expert Russell Myers claimed the monarch and the Duke of Edinburgh were devastated that the royal couple had not discussed things first. The Duke and Duchess of Sussex also announced their departure from the family through an Instagram post before informing the royals.

“It’s since been claimed that making an announcement without discussing it first left the Queen and the Duke of Edinburgh devastated.”

Mr Myers added: “The issue of them creating this SussexRoyal brand and website was a huge, huge problem with the Royal Family because if they were going to go into the corporate world and start marketing themselves for big sums of cash that was going to be a problem.

“The Queen and senior royals could not have them marketing themselves as a royal while also earning money on their own personal terms.”

Ms Saayeng continued: “Crisis talks were needed and on January 13, Harry met the Queen, Charles and William at the famous Sandringham summit.”

Royal correspondent Roya Nikkah added: “Yes, they were breaking free of the Royal Family, they were able to embark on a new chapter of their lives but it came at a huge cost.”

Since the Sussexes departure in March, an unofficial biography on their time in the Royal Family was released this month.

The book titled Finding Freedom by authors Omid Scobie and Carolyn Durand has lifted the lid on numerous leaks from the palace about the couple.

“It’s been interesting to see commentary emerge from various palace sources or royal aides almost discrediting the book without having read it.

“There was almost this fear internally that it would be something incredibly damaging to the Royal Family. If I’m being quite honest I think a lot of that boils down to the fear of the truth coming out.

“I think that this book does pull back the curtain in some ways on the inner workings of the machine that runs the institution of the monarchy.

“But I also think that what’s in this book is fair and balanced that’s why I mentioned it was important for us to speak to those close to the Cambridges and other members of the Royal Family.

“In those later stages when Harry and Meghan stepped back, we not only understand why they did it but why other members of the Royal Family might not have appreciated how it was done.”