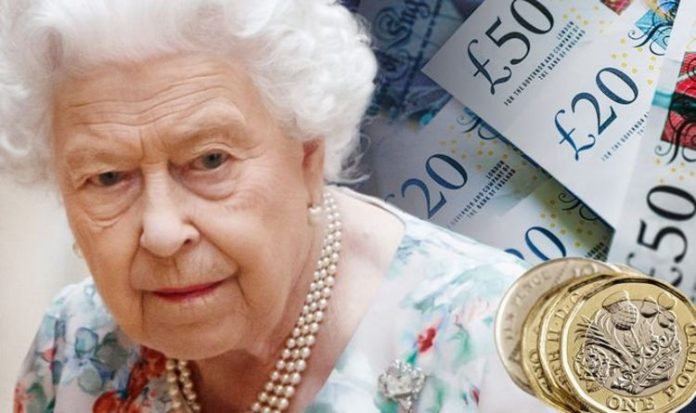 Queen Elizabeth II, 94, is believed to be one of the richest people in Britain but the true extent of her personal wealth has never been made public. The question of the Queen’s private fortune has been brought to fore after historic documents from the National Archives show a palace lawyer lobbied the Government in the 1970s in order to amend a piece of draft legislation that threatened to expose the Queen’s personal finances.

According to the documents, the Queen’s private lawyer Matthew Farrer lobbied the Government to make a change to an upcoming piece of legislation that would have exposed her shareholdings by using a parliamentary procedure called the Queen’s Consent.

Reporting on the historic papers, the Guardian newspaper claimed the Queen prevented the publication of her true wealth after ministers included a clause in the Companies Bill to prevent details of her private shareholdings from entering the public realm.

Buckingham Palace has rejected the claims in a statement that argues the Queen’s consent is a “purely formal” part of the Parliamentary process.

As the head of state, the Queen is expected to remain politically neutral and her involvement in law-making is purely formal.

Mr MacMarthanne added: “Part and parcel of this process has been to ensure that their investments remain private.

“As constitutional processes and practice permit the exercise of the Queen’s Consent it should come as no great revelation that it has been deployed to this end, not least in 1973.”

The expert said: “In the recent disclosures made elsewhere one important point, a point with political impact, has been overlooked.

He added: “Aside from seeking to continue the long practice of protecting the privacy of the Queen’s investments, through amending legislation, these steps were being negotiated one year after the passing of the Civil List Act of 1972.”

Given the circumstances, Mr MacMarthanne claims that revealing the Queen’s personal wealth at that time risked causing public outrage.

He said: “At a time of increasing economic and political uncertainty, and having claimed poverty for the institution, it would be most unfortunate for the investments held by the Queen to become known, and through which her private wealth ascertained making clear the extent of her exceptional wealth.”

However, the expert dismissed the recent revelations linked to the National Archive documents as “a storm in a teacup.”

He added: “That these events are now becoming known today will of course ruffle feathers, they will rightfully and properly offend democrats and republicans, and in the usual course of such events will act as another storm in a tea cup of the monarchical narrative.”

Explaining his views on how the British public may perceive the recent revelations, Mr MacMarthanne said: “Yet here is the reality of this situation: in general terms the people of this country are ignorant of the constitution so called; are oblivious as to the potential machinations of our institutions; and are, when all is said and done, generally not much interested in such dry subjects in any event.

“If we are offended by these revelations, as might we should, we might also want to ask ourselves how complicit we have been in their making.

“Moreover, we might want to stop and consider is it appropriate in the 21st century that one of our number is, by the conventions of our constitution, considered as the font of all laws, to in effect be the law – which is exactly what the Queen is in her capacity as the body politic of the nation.”

Mr MacMarthanne concluded by suggesting the documents expose a desperate need for reforms to the monarchy and the constitution.

He said: “Finally, we might also wish to consider is it fair to anyone that the monarch of our nation is expected in essence to have ‘two bodies’: a political and personal one, both of which can often be found, through no fault of their own, to be in conflict with the other.

“If these revelations show us anything, might it not be that constitutional reform and reform of the institution of the monarchy are desperately required.”

Reacting to claims the Queen’s former lawyer successfully lobbied the Government to have the draft bill amended, a Buckingham Palace spokesman said: “Queen’s consent is a parliamentary process, with the role of sovereign purely formal.