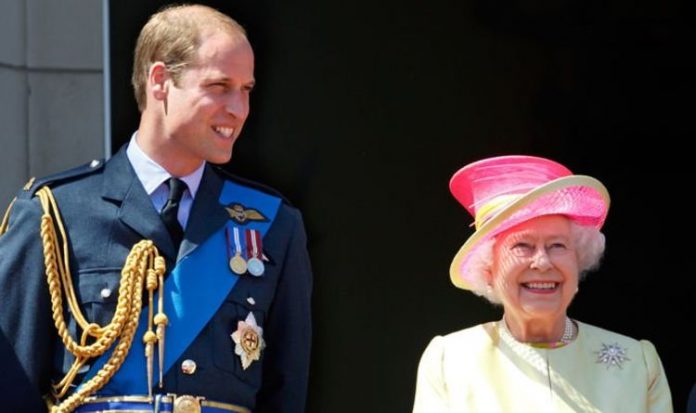 Prince William and his wife Kate, Duchess of Cambridge visited Windsor Castle on Tuesday, following the end of their successful three-day tour of the UK via the Royal Train. The Queen was also visited by her son Prince Edward and his wife Sophie, Countess of Wessex. The meeting of the senior royals at Windsor marked one of the few times the Queen has been seen out and about since the lockdown this year.

The Queen has been isolating for most of the pandemic at Windsor with Prince Philip, and she has slowly started resuming a schedule of some royal engagements in recent months.

Getting to see the Queen this week was no doubt a boost for the public, after what has been a very difficult year for many people.

But the Queen’s recent meeting with William reminded us that as well as being the nation’s sovereign and head of state, the Queen is also a grandmother too.

While the rest of us would probably stick to ‘Your Majesty’ or ‘Ma’am’ when greeting the Queen, the family’s recent meet-up demonstrated that Prince William gets special privileges as the monarch’s grandson.

William and Kate were seen stopping for a quick chat with the Queen, outside the castle at a social distance.

And as Prince Edward and Sophie, Countess of Wessex gathered to say their hello’s to the Queen, William was heard calling out: “Bye gran”.

Over the years there have been several reports suggesting William and the Queen have a close relationship.

As a child, William once fell over and proceeded to cry out: “Gary, Gary.”

“I have been able to explore, understand, slightly carve my own path. I greatly appreciate and value that protection.”

As well as being William’s loving grandmother, the Queen also has to juggle her family role with her position as a mentor.

As William will one day be the King, the Queen has been helping to prepare him for this responsibility for much of his life.

The Queen is believed to have started William’s constitutional education from a young age.

Royal historian Robert Lacey told People: “There has always been a special closeness between William and the Queen, and she has taken a particular interest in him.

“When William became a teenager, she would have him at Windsor Castle and would open the state boxes and guide him through the papers. It was William’s constitutional education.”

In the last few years, the Queen appears to have given William and his wife Kate more responsibility, and the couple are often entrusted to complete important royal engagements and tours on their own.

William is also regularly chosen to accompany the Queen on important visits, and he was by the Queen’s side for her first in-person engagement in October following months of isolation at Windsor.