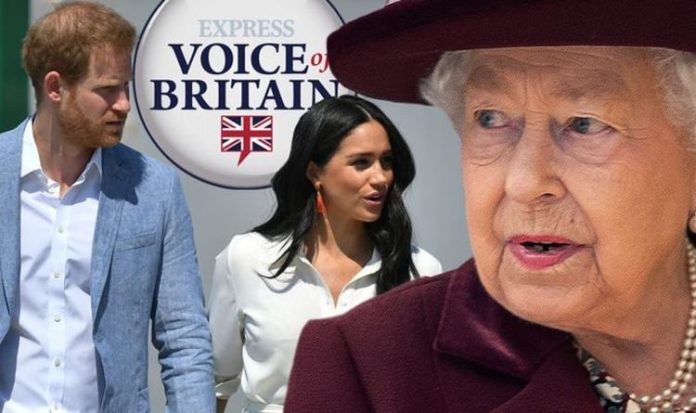 The Duke and Duchess of Sussex stood down as senior members of the Royal Family earlier this year in order to become financially independent from The Firm. Meghan and Harry agreed to a number of new rules including that they would stop using their HRH titles.

During crisis meetings with the Queen, Prince Charles, Prince William and Prince Harry, the family agreed the Duke and Duchess of Sussex would have to abide by a number of rules.

They were told they could no longer use their HRH titles after stepping down, but will still be known as their Duke and Duchess titles.

In a poll – which ran from 1pm to 8pm today – Express.co.uk asked whether the Queen should reinstate their HRH out of goodwill.

“It would see the end of the monarchy.”

Another person said they should lose their Dukedom as well and said: “They’re no good to the fine people of Sussex when they live in Los Angeles.”

Someone else simply said let them “sort themselves out”.

Another person added: “No! What good will have they shown the Royal Family, abandoning them after such a short time.

“Most of which was filled with holiday and maternity leave.”

Others saw the need for Meghan and Harry to have their titles reinstated.

One person said it was “stupid and petulant” to stop them using their titles.

They said: “Of course she should let them, they have much to offer the monarchy and the country without taking a huge sum from the public purse.”

The terms of the so-called “Megxit deal” were announced by Buckingham Palace, but the arrangements will be subject to a review after 12 months.

The one-year transition period appears to have left the door open for the Duke and Duchess of Sussex to return to the Royal Family if they wanted to.

The review is due to take place at the end of March 2021, 12 months after the couple officially ceased to be working members of the Royal Family.