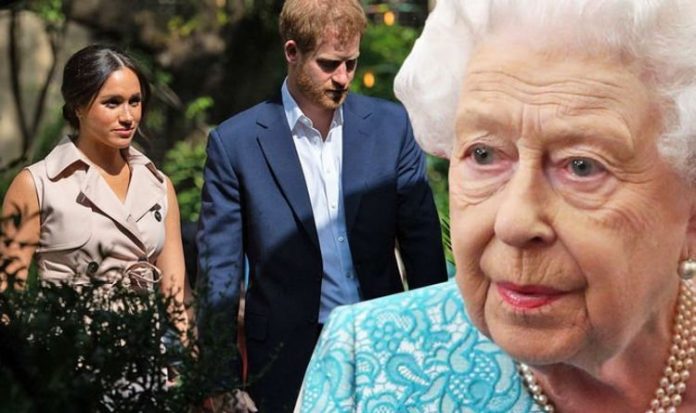 Royal commentator Robert Lacey said he sympathised with the Queen when she was forced to make a difficult decision with Prince Harry and Meghan Markle. While speaking on Sky News, Mr Lacey explained the Queen had to choose how best to handle the decision of Harry and Meghan to step down as working royals. He insisted at the time the Queen was torn between her duty to the crown and her love of Prince Harry and desire to help him as a grandmother.

The Sky News host said: “In that Sandringham summit and the statements issued afterwards, the Queen was treading that line between grandmother and the monarch.

“How do you think she views the behaviour of Harry and Meghan and especially now in their new lives that they are carving out for themselves in the US?”

Mr Lacey admitted it was difficult to know exactly how the Queen was feeling but he noted the monarch may be torn.

He replied: “It is very difficult and delicate to speculate about the thoughts and feelings of the Queen.

“We know that she loves Prince Harry as a grandmother.

“We know that early March this year she deliberately invited Harry for a private lunch right in the middle of all the trouble.

“She did this to talk to him and tell him anytime he wanted to come back he would be very welcome.”

Mr Lacey reiterated the special relationship between Prince Harry and the Queen due to his difficult childhood.

He continued: “There is such a link between the Queen and the two boys she saw through the tragedy of their mother’s death.

“But she has a job to do, she has a Royal Family with standards to uphold.

“At that stage, she did not feel the commercial plans that the Sussexes were putting forward were dignified or royal.

“So she said you can’t call yourself Sussex Royal if you want to create some sort of company to make money.

“She said you will have to call yourselves something else, at that point, she drew the line.

“One can only sympathise with the Queen’s plight and feelings.

“She is torn by her love for this troubled bo but also the consequences of the difficult upbringing that both he and William had.”