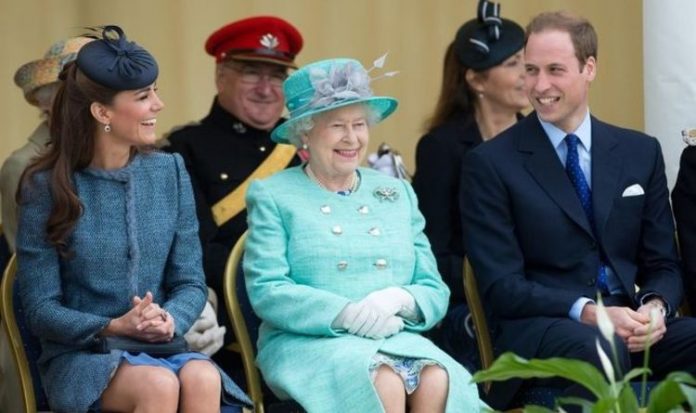 The Duke and Duchess of Cambridge travelled to Balmoral, the Scottish estate where the Queen holidays every summer, with their three children, Prince George, seven, Princess Charlotte, five, and Prince Louis, two this weekend. The trip marked the first time the Queen had reunited with the Cambridges since before the coronavirus lockdown began in March.

Royal insiders said the monarch spent time with her great-grandchildren outside on the 50,000-acre estate in the Scottish highlands.

Kate and William made the almost 450mile trip to lend their support to Her Majesty after what has been a “difficult year”.

The couple were described as feeling “over the moon” to have finally reunited with the Queen and Prince Philip, Duke of Edinburgh.

The two households kept their distance during the visit, in accordance with the Government’s social distancing guidelines.

A royal source told the Sun on Sunday: “Like every family, they’ve been desperate to get back together and over the moon it was possible this weekend.

“They’ve all been up there for a few days and although there are very strict procedures with social distancing, they’ve been able to find ways of seeing each other outside.

“It’s obviously been a difficult year for the Queen and Duke of Edinburgh seeing the country dealing with the pandemic, so they were all keen to go there to show their support.”

READ  Healthcare for planets and humans: why looking after nature is good for mind, body, and the NHS

The Cambridge’s aren’t the only royals to make the trip to Scotland this summer.

The Queen has spent a 12-week break at Balmoral for each of the past 68 years of her reign.

Her Majesty and Prince Philip currently remain in a Covid-secure “bubble”, where the couple are subject to strict measures to ensure their safety from the deadly virus.

A reduced staff are looking after the pair, who are under strict rules to ensure the monarch remains safe.

For example, staff were told they would be doing their duty by not seeing their families during the lockdown.

The Queen is expected to return to her Berkshire residence in the autumn, after her summer break in the Scottish highlands.

On her return, the monarch hopes to resume face-to-face royal visits as she is keen to get back to work, according to royal sources.

One insider claimed the Queen feels she “needs to be seen to be believed”.