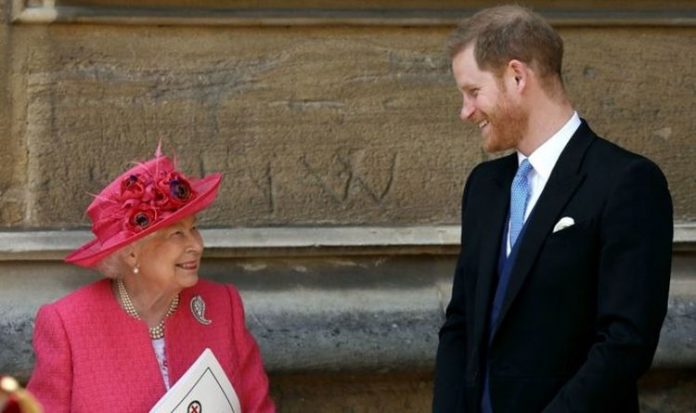 The Queen and the Sussexes are “in close contact” and talk regularly, according to royal author Katie Nicholl. And whenever the monarch “touches base” with Prince Harry, she has the chance to see his 19-month-old son Archie.

But during these calls, grandson and grandmother also discuss the projects the Sussexes have for their future, Ms Nicholl added.

She told ET! online: “The Queen has kept in close contact with Harry and Meghan for the past year.

“She’s in touch with them, she knows what’s going on in their lives, they discuss their plans with her.

“Harry has always seen his grandmother as a mentor and while he might be in LA, that hasn’t changed.”

The Queen and Prince Harry are ‘in close contact’ – expert (Image: GETTY)

The Queen regularly ‘touches base’ with Prince Harry (Image: GETTY)

Speaking about the virtual presence of little Archie, Ms Nicholl added the Queen “is always delighted to see Archie on video calls”.

The elderly royal is believed to have last seen her eighth great-grandson in autumn 2019 before the Duke and Duchess of Sussex left with Archie for a six-month break from royal duties.

Following the announced break, which saw the Sussexes spend Thanksgiving and Christmas in British Columbia, Meghan and Prince Harry returned to the UK to announce their plans to step back as senior royals.

READ MORE: Prince Charles to copy Queen and confirm when he has vaccine

The Queen with Meghan and Harry at the 2019 Trooping the Colour parade (Image: GETTY)

After jetting off again across the pond, the Duke and Duchess returned to complete their last engagements as senior royals in March.

Archie, however, did not travel back to England during 2020.

Ms Nicholl, highlighting the bond between the Queen and Prince Harry and speaking about their video calls, noted that “it’s very important to her that she touches base with Harry.”

The Queen with her grandchildren Harry and William in the 1980s (Image: GETTY)

The Queen and Prince Harry are still very close despite Megxit (Image: GETTY)

News of the Queen speaking regularly to the Sussexes came as it emerged the monarch is hoping to return to London to celebrate her official birthday in June.

If the coronavirus pandemic will allow it, the monarch wants to resume in full splendour the Trooping the Colour parade in London, after it had to be streamlined and moved to Windsor Castle in 2020, an insider has claimed.

A senior royal aide told day Times: “The current plan is for the Queen’s birthday parade to go ahead in London as normal, with the acceptance that it may need to be adapted or scaled back depending on what guidelines are in force at the time.

“But the aspiration and the ultimate desire is to make it happen.”

No final decision has been made yet, as the parade will only go ahead if the coronavirus cases are steeply reduced and Government regulations allow it.

But if the Queen is allowed to have a full-scale celebration of her official birthday on June 12, Trooping the Colour will be both an official and “family occasion”, according to insiders.

Meghan and Harry would likely be allowed to join the rest of the royals on the Buckingham Palace balcony, as this celebration is usually attended by both senior and non-working royals.

The Sussexes have been tipped to travel back to the UK in June also because that month will mark Prince Philip’s 100th birthday.

The Queen hopes to be able to celebrate her official birthday in London this year (Image: GETTY)

Three weeks after the Duke of Edinburgh’s birthday, on July 1, Prince Harry is also likely to attend the unveiling of the statue of Princess Diana at Kensington Palace.

Speaking about a possible return of the Sussexes to England during the summer, Ms Nicholl said: “It is Harry’s intention, and Meghan’s also, to be here in the UK for that opening [the unveiling of the statue].

“It may possibly be the first time we see the brothers together, but I think that we will probably see them together in the spring around the Queen and Duke of Edinburgh’s birthday celebrations. COVID travel plans permitting.”