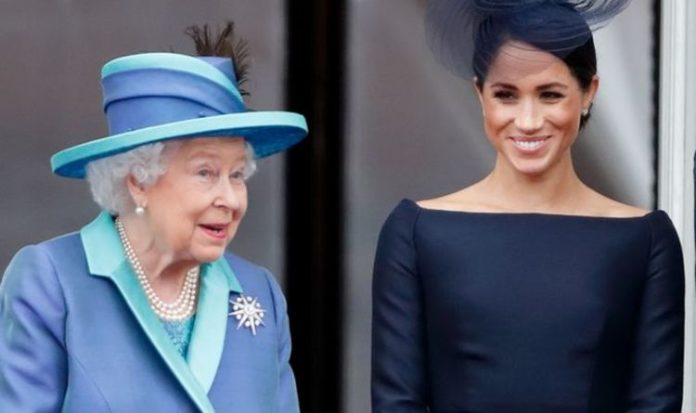 Meghan Markle celebrated her 39th birthday on August 4 in Los Angeles with her husband, Prince Harry, and their son, Archie. To mark the occassion, Royal Family members posted birthday messages on their social media to the Duchess of Sussex. Royally Obsessed podcast hosts Roberta Fiorito and Rachel Bowie pointed to the Queen’s in particular and why it differed from the others.

Ms Bowie told listeners: “I loved waking up to that in my feed.

“Royal birthdays are great because your social media is so happy.

“I loved the Queen’s especially, it was the only one that really stood out to me because it has the Queen in it.

“I think that was such a show of support from her.”

READ MORE: Kate ‘did little to bridge divide’ between William and Harry

She added: “It was their first engagement together without Harry so that was really important. The other ones were just Meghan.”

Ms Fiorito agreed: “We famously remember that event because they were laughing so much together.

“So I think for the Queen to cherry-pick those is such a show of support.”

Meghan joined the Queen on a visit to Cheshire in June 2018, less than a month after she married Harry.

After Meghan and Harry announced that they would be stepping back from their roles, the Queen released a statement granting her full support to the couple.

She said she was “entirely supportive” of their desire for a new role but “would have preferred” them to remain full-time working royals.

Her statement read: “My family and I are entirely supportive of Harry and Meghan’s desire to create a new life as a young family.

“Although we would have preferred them to remain full-time working members of the Royal Family, we respect and understand their wish to live a more independent life as a family while remaining a valued part of my family.”