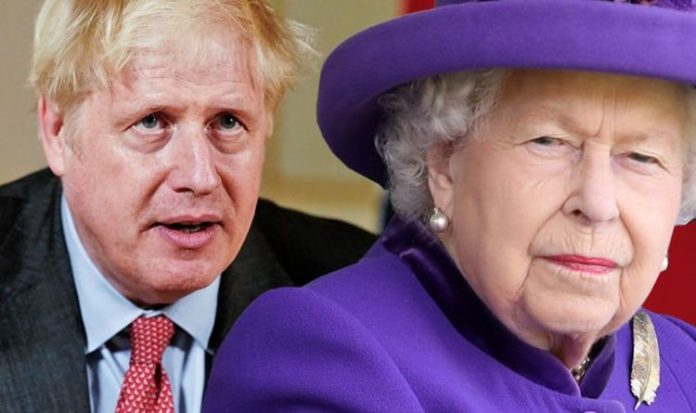 Anti-monarchy campaigner Graham Smith told Express.co.uk that the Queen has the technical power to dismiss the Prime Minister or any Minister as they are appointees of hers. However, the Republic CEO stated that Queen Elizabeth II will not exercise the power regardless of whether Boris Johnson breaks international law with his latest Brexit trade Bill as it would jeopardise the monarch’s popularity among Brexiteers.

Mr Smith said: “Our constitution is pretty woolly, and a lot of these rules are based on habit and what people have done in the past and what they are prepared to do now.

“But technically the Queen has the power to dismiss the Prime Minister and any Minister.

“They are appointees of hers and she could dismiss them if she likes.

“She could have a very strong word privately, saying I may dismiss your Government if you go down this road. She could also make public statements as well.”

He continued: “The problem is she will not do any of that because that will jeopardise her own position.

“The Government would simply turn round and say you fail us we will fail you.

“I think it would make Republicans out of a lot of Brexiteers.

“A lot of people who support Boris Johnson would see that as a betrayal by the Queen.

The Republic CEO said: “The monarchy tends to survive because of the Queen. Prince Charles is not as well liked or supported.

He is also much easier to challenge and criticise, the problem with him is that he cannot help himself when it comes to interfering with politics.

“If we have just one serious issue where the Government, after he becomes King, changes its policy to match what Charles has said on the public record previously then we have to start asking questions as to whether they did that because they thought it was a good idea or because Prince Charles was lobbying them privately. That would cause a very serious crisis.”