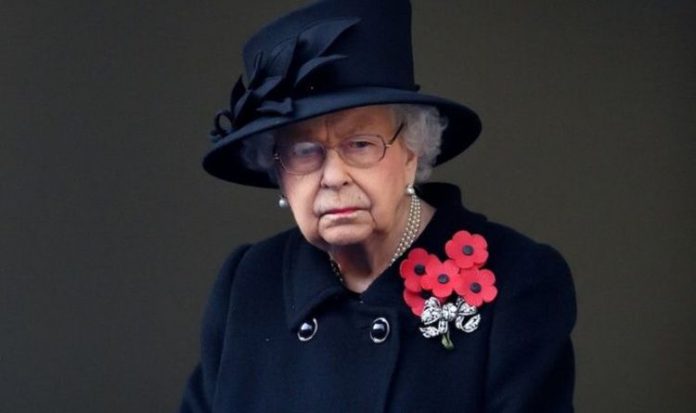 Every single item in the Queen’s outfit is part of her royal uniform – and the hat is the one bearing the most significance, according to royal expert Robert Lacey. The royal commentator provided his thoughts on the monarch’s style to Elizabeth Holmes for her book HRH: So Many Thoughts on Royal Style.

Speaking about the Queen’s typical outfit, Mr Lacey compared the Queen’s colourful hats, which she always wears when she is carrying out a royal duty outside her residences, to military ones.

He told the fashion journalist in her book: “Very few modern women wear a hat as part of their work uniform, aside from perhaps members of the armed forces.

“It’s a reminder that the Queen is indentured to a service, to a job.”

The Queen’s most typical outfit is usually composed by a hat, a colourful coat and dress, a signature brooch, gloves, shoes and a Launer handbag.

The Queen paying tribute to the Unknown Warrior (Image: GETTY)

The Queen has shown her dedication to her role even during the pandemic.

However, she continued to work from her residence in Berkshire, receiving the red Government box on a daily basis and holding phone meetings with the Prime Minister every week.

The Queen usually wears hats when carrying out engagements outside of her home (Image: GETTY)

As shown by the Court Circular, the register recording every official activity of senior royals, the monarch also continued to back her patronages and associations.

Most notably, during the first lockdown, the monarch delivered two speeches.

First, in April, she urged the country to be inspired by its wartime past.

The Queen and Prince William visiting Porton Down (Image: GETTY)

The Queen with a lady-in-waiting at the National Service of Remembrance (Image: GETTY)

In May, the monarch marked the 75th anniversary of VE Day with another speech in which she recalled her personal memories of the day.

In October, shortly after her return from her summer break, the monarch carried out her first royal visit since March, meeting alongside with Prince William staff at Porton Down.

Despite the rise in coronavirus cases and the looming second lockdown, the monarch also chose to visit in person the tomb of the Unknown Warrior at Westminster Abbey in the run-up to Remembrance Day.

At the stripped-down service, the Queen stood only in the company of one lady in waiting on one of the balconies of the Foreign and Commonwealth Office facing the Cenotaph.

On that occasion, she donned her royal uniform made of a hat, matching coat and gloves – albeit in black, as a sign of respect.

The Queen signalled a strong commitment to her duty and the Crown since a young age.

Aged 21, the then Princess Elizabeth pledged to protect and serve the country and the Commonwealth for “my whole life”.

Speaking on her birthday, she said: “I declare before you all that my whole life, whether it be long or short, shall be devoted to your service and the service of our great imperial family to which we all belong.”

The monarch has recently signalled she does not intend to step down despite the challenges posed by the pandemic.

In a brief statement issued alongside the announcement of a four-day bank holiday to mark the event between June 2 and 5 2022, Buckingham Palace said the monarch is hoping as many people as possible across the UK will be able to join the celebrations of this milestone.