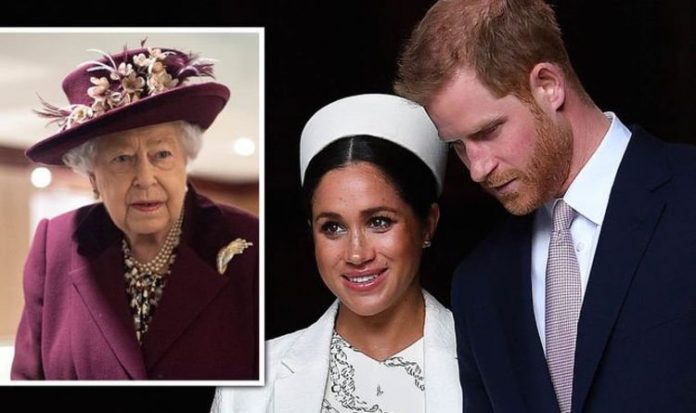 Meghan and Harry are set to lose all the patronages acquired through the Royal Family, it was claimed yesterday. However, Buckingham Palace seemingly signalled 13 months ago the Duke and Duchess of Sussex were to lose all their royal patronages if they did not return to the Firm at the end of the review period, a royal expert has noted.

Prince Harry agreed the terms of his and Meghan’s exit as senior royals on January 18 last year, during a summit at Sandringham House with the Queen, Prince William and Prince Charles.

A few hours after the four royals had gathered to flesh out the Megxit agreement, Buckingham Palace and the Queen released two statements to update the public on the decision made.

The monarch used her personal message to thank Meghan for “quickly” becoming a member of the Royal Family and express her support for the Sussexes’ wish to lead a more independent life.

READ  Royal titles in order: Which royal has the most prestigious title? | Royal | News (Reports)

On the other hand, Buckingham Palace issued a statement outlining the next steps both the Firm and the Sussexes would have to take to fulfil Megxit.

And this message contains a detail possibly indicating the palace had already laid the foundation to strip Meghan and Harry of all their patronages but their private ones, the Daily Express royal correspondent Richard Palmer said.

He wrote on Twitter: “The National Theatre told the Daily Express yesterday that it still wants Meghan to remain as its patron.

“But the Queen’s view seems clear: you can’t represent her as patron of big national organisations and be out of the Firm.

READ MORE: Royal baby 2021: When is Zara Tindall’s baby due?

“It’s a different matter with their own charities.

“We always knew the military patronages were on hold and up for discussion after the first year of Megxit.

READ  Royal Family news: Beatrice wraps up as she is spotted out in public with husband Edo | Royal | News (Reports)

“But I think many of us missed the significance of the palace only talking about ‘private patronages’ after the Sandringham summit in January last year.”

The statement dated January 18 last year read: “The Duke and Duchess of Sussex are grateful to Her Majesty and the Royal Family for their ongoing support as they embark on the next chapter of their lives.

“As agreed in this new arrangement, they understand that they are required to step back from royal duties, including official military appointments.

“They will no longer receive public funds for Royal duties.

“With The Queen’s blessing, the Sussexes will continue to maintain their private patronages and associations.

“While they can no longer formally represent The Queen, the Sussexes have made clear that everything they do will continue to uphold the values of Her Majesty.”

During the summit in Sandringham, Prince Harry also agreed on no longer using his and Meghan’s His/Her Royal Highness styles.

Following the summit, the Sussexes pledged to repay in full the £2.4million spent to renovate Frogmore Cottage, their home in Windsor – and did so during the summer of 2020.

Similarly, Meghan risks losing her patronage of the National Theatre, which was passed on to her by the Queen.

Both Meghan and Harry also hold a number of patronages of organisations they either created or started collaborate with without any previous royal link.

Among them, there are the Duchess’ Smart Works and Mayhew and Harry’s Invictus Games Foundation and Sentebale.