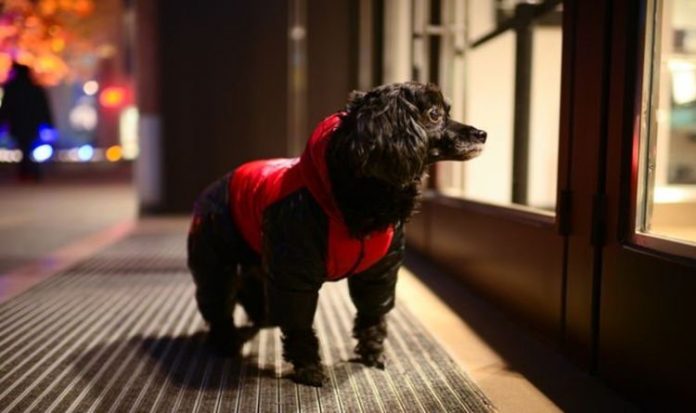 Poor Bruno has been through quite the ordeal. First, he was taken from his home in Buckinghamshire in December along with two other roan-coloured spaniels, a male and a female named Dolly and Marmalade.

He was later found in Darlington, 230 miles north. When he was waiting in kennels to be reunited with his worried owners, he was cruelly stolen again, all in the space of one week.

Bruno’s owners posted a desperate plea on social media to try and find their beloved pet. The appeal gained momentum and prompted a huge internet campaign to get Bruno home safe.

The Facebook post read: “Dear Bruno, how unlucky can one dog be? Waiting to be reunited with his family, he has been stolen again from police approved kennels in Darlington.”

Thankfully, happy news came on Monday when Bruno was found in Leeds, 176 miles from his home in Buckinghamshire. The poor dog had been tied up and abandoned.

The group wrote on Monday: “FINALLY- The news you have all been waiting for…

“Bruno is safely home. He was picked up straying, having been dumped in Leeds early this morning. He was handed into a vet and owner advised. He is in good shape and checked over. He was sat with his lead waiting patiently!

“Owner and family wish to thank each and every one of you for all your shares.”

The group then reminded “there are still two other dogs stolen with him that remain missing”, referring to Dolly and Marmalade who still have not been found.

This news comes after reports dog theft are massively on the rise across the UK, increasing by 170 percent since the beginning of lockdown.

The pandemic has caused a rise in demand, and the cost of dogs has skyrocketed. Criminals are taking this opportunity to snatch and resell them to make some cash.

According to the Pet Census there are a number of places your dog is most likely to be stolen. The most likely being the owner’s garden, local parks and cars.

If your dog does go missing it is crucial to act quickly. Immediately report the crime to the police and ensure you are given a crime reference number- and that your dog is correctly reported as stolen, not lost. Notify your microchip provider, vets, nearby rescue centres and your local authority dog warden, if you have one.

Social media can also be effective in spreading the word as seen from Bruno’s story.