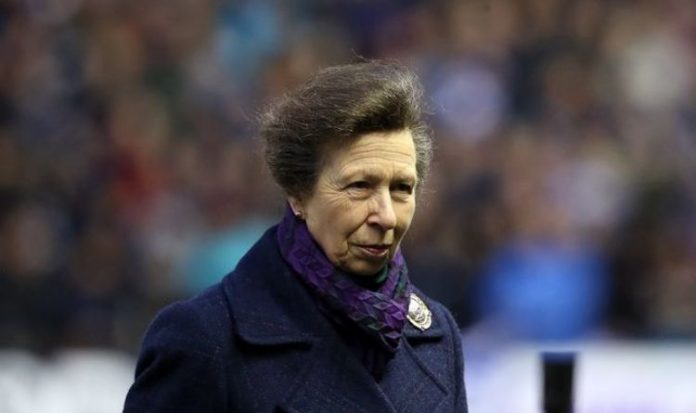 Between June 2017 and May 2018, the Queen suffered a major heartbreak as five of her beloved ponies died as a result of EGS, some within 24 hours of each other. As a new research project into the fatal illness is set to be launched, Princess Anne has opened up about the “devastating impact”.

While speaking on the OnFarm podcast, the Princess Royal was asked whether she had encountered the disease.

The 70-year-old replied: “Yes. More so recently at Balmoral where they’ve had quite a lot of losses sadly.

“And that’s – you know, particularly when you’re breeding Highland Ponies and you lose two really nice colts in one go.

“That’s a pretty devastating impact, as well as the fact that they are working ponies, it’s important to keep those gene pools relevant.”

The Queen is an avid horserider (Image: Twitter/Royal Family)

Balmoral Highland Pony Stud, Sylvia Ormiston, previously revealed the Queen had visited one of the ill horses, known as Hercules before it passed away to EGS in 2018.

Ms Ormiston said: “He started to show signs of being sick on the Friday evening.

“The Queen came to see him on the Saturday.

“It was enough time that the Queen could come to see him, to actually say goodbye – because there was nothing we could do.

Hercules’ death came two weeks after another stallion, Lord, who was put down due to the illness.

These deaths followed those of Friendly, a two-year-old filly, and her mother Clunie who died within 24 hours of each other and another horse, Omar, back in 2017.

Ms Ormiston added: “They are doomed, there is no return, they are dead on the inside… and it’s so devastating because you are standing there wishing you could do something for what looks like a perfectly healthy animal.”

Much like her mother, Princess Anne is an avid horse rider and competed as an equestrian in the 1968 Olympic Games.

The Princess Royal is also the patron of The Moredun Foundation (TMF) and The Equine Grass Sickness Fund (EGSF).

The two organisations are teaming up to launch a research fellowship into the illness, which often results in the death of horses.

Princess Anne has taken on Trooping the Colour (Image: Getty)

“It is still a seriously difficult disease to get a grip of.

“And I hope this new Research Fellowship will encourage people to understand just how important it still is.”

In her youth, the Queen used to join the Trooping the Colour military parade on horseback, wearing a ceremonial uniform.

Princess Anne has since taken up the mantle and made headlines in 2019 when she was seen wearing a black frockcoat on horseback.

The 94-year-old monarch remains an avid horse rider and is often spotted enjoying a ride in the grounds of her many estates.