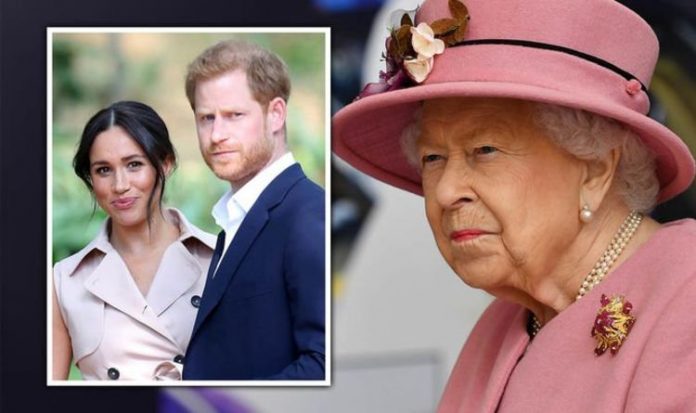 Professor Robert Hazell, from UCL’s Constitution Unit, told Yahoo: “The line of succession is laid down in law, most recently the Succession to the Crown Act 2013, which abolished the rule of male primogeniture and introduced gender equality.

“The Queen has no power to change the line of succession.

“So if Harry were to be removed from the line of succession, it would require legislation through an Act of Parliament.”

Queen news: The Queen can’t change the line of succession to the throne (Image: GETTY)

Queen news: Prince Harry is one of the Queen’s eight grandchildren (Image: GETTY)

Every member of the Royal Family born after October 28, 2011 is subjected to this act, which states the eldest child, regardless of sex, precedes their siblings in the line of succession.

This ruling has had a significant impact on the Royal Family, with Princess Charlotte becoming the first royal to take advantage of it following the birth of Prince Louis in 2018, when she retained her position in the line of succession despite being female.

Changes to the line of succession to the throne are also to be approved by all the realms in which the Queen is head of state – including Australia, Canada and New Zealand.

Professor Hazell’s reminder comes after a snap poll run by YouGov on February 22 showed 49 percent of the people polled saying the Duke of Sussex “should be removed” from the line of succession.

Of the 4203 people polled, 28 percent think he should not be removed and 24 percent said they didn’t now.

Queen news: The Queen and Prince Harry at a garden party (Image: GETTY)

Two leading royal experts have recently called for Prince Harry to relinquish his position as sixth-in-line.

Author Robert Jobson said the country is only “a couple of breaths away from a constitutional crisis” by leaving non-working royals so high-up in the line of succession.

He told BBC Breakfast: “I think it’s time the Royal Family woke up to the situation that [Meghan and Harry are] not coming back.

Queen news: The line of succession to the throne (Image: EXPRESS)

Prince Harry is followed on the line of succession by his son Archie Prince Andrew, who announced in November 2019 he would temporary step back from public duties following his car crash interview with Emily Maitlis.

The Duke and Duchess of Sussex’s second child will become eighth-in-line upon his birth.

Royal commentator Hugo Vickers also believes the Duke of Sussex should relinquish his position now that he has chosen to live mainly in California and pursue financial freedom.

He wrote in the Daily Mail: “As the sixth in line to the throne, it would take a catastrophic turn of events for him to be called upon as King.

Queen news: Archie is seventh-in-line to the throne (Image: GETTY)

Mr Vickers branded this scenario “not a comfortable prospect” in light of the roles and financial freedom Meghan and Prince Harry have carved out for themselves after stepping down as full-time working royals.

The expert also said “no one wants” Meghan to be crowned Queen Consort.

Mr Vickers added: “Then there is the prospect of Queen Meghan, which no one wants.

“The idea that she could end up representing our country is impossible. It simply cannot be.”