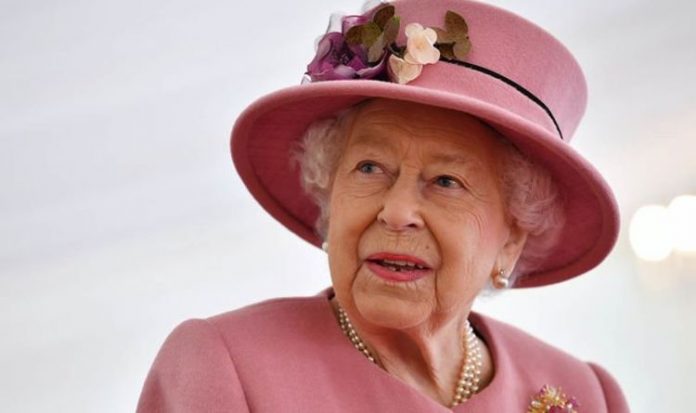 Queen urged to see reign through ‘to the end’ by expert

The Queen’s official Twitter account, Royal Family, shared news of the latest engagement carried out by Birgitte, the Duchess of Gloucester. The Duchess, who is the Commandant-in-Chief of St John Ambulance Cymru, spoke over the phone with chief volunteer Richie Paskell about how the charity is supporting the vaccination drive in Wales.

The conversation between Mr Paskell and the Duchess took place earlier this week, the Royal Family Twitter account said.

Starting a rare Twitter thread focused on the Duchess of Gloucester, who is a full-time working royal, the account shared more information about her relationship with this patronage.

Sharing a picture of the Duchess taken during her visit to St John Ambulance Cymru in 2018, the message read: “HRH, pictured in 2018, asked Richie to pass on her thanks and warm wishes to all at @SJACymru.”

It added in a different tweet: “The Duchess of Gloucester has been keeping in touch with @SJACymru throughout the pandemic.”

Queen news: The Queen has paid tribute to the Duchess of Gloucester’s work via Twitter (Image: GETTY)

Queen news: The Duke and Duchess of Gloucester got married in 1972 (Image: GETTY)

This organisation is being instrumental in supporting the vaccination programme undergoing in Wales.

The Royal Family Twitter account usually shares news and information about the Queen, but it also features the work of the Wessexes, Princess Anne and other royals who don’t have their own personal social media account and often operate behind the scenes.

The Duchess of Gloucester, born in Denmark, joined the Royal Family in 1972, when she married Prince Richard.

The Duke of Gloucester, the youngest grandchild of King George V and Queen Mary, had a career as an architect until 1972, when his elder brother and heir to the dukedom, William, died in a plane crash.

Two years later, following the death of his father, he took on the title and the additional obligation and royal duties coming with it.

He currently is 27th in the line of succession to the throne.

However, this year, he is destined to be pushed down the line, as both Zara Tindall and Princess Eugenie, who are placed higher up in the line of succession, are expecting a baby.

Queen news: The Gloucesters attending the 2019 Festival of Remembrance with other senior royals (Image: GETTY)

Queen news: The Duke of Gloucester was the youngest grandchild of King George V (Image: GETTY)

The Gloucesters are very committed to the Crown and their royal work.

Prince Richard is associated with more than 150 charities and organisations.

The Duke included architecture and landscaping in his royal work as a momentum of his previous career, but he also supports humanitarian issues and military veterans.

The Duchess is connected to more than 60 organisations supporting the arts, health, welfare and education among other issues.

Queen news: Residences of royals across the UK (Image: GETTY)

Speaking about her involvement with charities throughout her life as a senior royal, the Duchess said: “As members of the Royal Family and in our public life, The Duke and I have the huge privilege of continuously meeting people greatly committed to their work with charitable causes – many individuals being volunteers, doing all kinds of good works, giving of their time, talents and expertise.”

The Royal Family’s tweet in support of Duchess Birgitte comes as the 12-month transition period agreed last January with the Queen, Prince Charles, Prince William and the Sussexes is coming to an end in March.

The royals are scheduled to reconvene at the end of this transition period to make sure the terms agreed still work for everyone involved.

Among the issues that could be discussed, there are Harry’s military patronages and the Sussexes titles.

Queen news: The Queen and Prince Harry during a joint engagement (Image: GETTY)

However, a royal insider believes the review may be cancelled for the time being.

Royal expert Katie Nicholl told True Royalty TV: “My understanding from the Sussexes camp is that there has been communication with the Queen, Prince Charles and with William as well.

“The general feeling is that this [current situation] is working.

“This isn’t to say that people are not watching closely what these deals are, what the couple are doing and what these projects are going to be.

“But there is not this need to have this review one year on.”