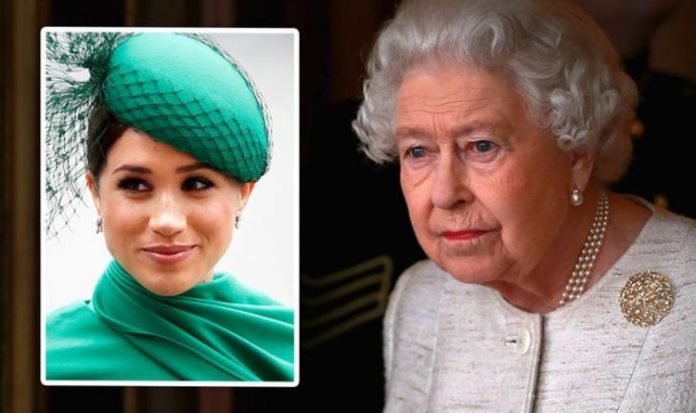 The Queen would likely intervene and issue a stern statement if she was unhappy with what Meghan and Prince Harry are doing in the US, according to US royal expert Marlene Koenig. Asked whether Meghan was going against royal protocol by speaking about politics using her title in the US, Ms Koenig wrote on Twitter: “If the Queen were not pleased with this there might be a statement that they would not use their titles, but for now there’s no issue.”

Moreover, the expert added, the Duchess of Sussex is no longer on British soil and in a taxpayer-funded residence.

As she now lives in an American mansion she and Prince Harry bought, Meghan is freer to share her opinions in way full-time royals living in the UK would never be able to.

Ms Koenig added: “If she were doing it from Frogmore Cottage that would be different.”

The Duchess of Sussex has been openly speaking about US politics in her last public appearances, urging all women to register and vote in the upcoming election.

The Queen would act swiftly if she didn’t agree with Meghan Markle’s latest public engagements, an expert said (Image: GETTY)

Her participation in the When All Women Vote virtual event earlier this month has been perceived as politically charged by some royal fans and commentators as this appeal had been organised by When We All Vote, a group launched by former US First Lady Michelle Obama.

Moreover, Meghan’s accusations against Donald Trump in 2016, when she branded him “divisive and misogynistic”, is giving away who she will vote for in the upcoming election, according to commentators, making her plea to head to the ballot not neutral.

Today, the Duchess of Sussex is to appear in a pre-recorded face-to-face interview with feminist and author Gloria Steinem.

The Queen and Meghan Markle on their joint engagement in 2018 (Image: GETTY)

A teaser clip shared yesterday shows the two activists sitting outside as they discuss key topics such as the importance to vote and representation.

As revealed by media brand and women empowerment charity MAKERS on Twitter, the Q&A will also explore how women are “linked and not ranked”.

But the fact that MAKERS referred to Meghan as ‘Meghan, The Duchess of Sussex’, sparked criticism against the royal.

Meghan Markle said she is happy to have returned to the US in a recent interview (Image: MAKERS/DUKE AND DUCHESS OF SUSSEX)

Meghan Markle and Prince Harry now live in the US (Image: GETTY)

US royal fan Royal Tea wrote on Twitter: “It’s not a great look to have the main quote from the interview be about women being ‘linked not ranked’, and be referred to by your literal rank.”

Similarly, Danielle Amelia said: “Isn’t using her title for this implying her rank though.”

In the clip, Meghan voices her delight at having returned in the US after having lived for a decade abroad.

The Duchess first moved to Canada when she obtained a role in US legal drama Suits, filmed in Toronto.

In autumn 2017, after having dated Prince Harry for a little more than one year, the former actress moved to the UK to start her life with the Duke.

After being welcomed back to the US by Ms Steinem, who told Meghan she was “so glad” she was home, the Duchess replied: “Me too, for so many reasons.”

As a member of the Royal Family, Meghan first spoke about politics in the US in early June, following the death of George Floyd on May 25.

The Queen with the Duke and Duchess of Sussex during last year’s Trooping the Colour (Image: GETTY)

In a speech to the graduating class of 2020 at her former high school, Meghan publicly backed the Black Lives Matter movement.

The Duchess of Sussex also took part in a virtual summit organised by The 19th, a non-for-profit news organisation.

During the summit, Meghan interviewed the organisation’s founder Emily Ramshaw and further discussed the “turning tide” in the US following Mr Floyd’s death.