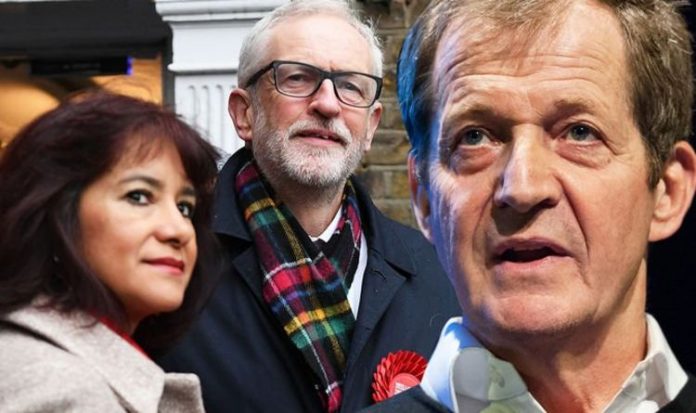 On Sunday, Jeremy Corbyn’s wife, Laura Alvarez, hinted at a new book about how her husband was the victim of a media slur when he was leader of the Labour Party. Mr Corbyn’s third wife made the announcement on Twitter. It is not clear whether Mrs Alvarez will be writing the book herself or whether she is simply endorsing one which is yet to be published.

Alongside a picture of her and the former Labour leader, she wrote: ‘The mainstream press obsession with its distorted account of previous Labour leadership goes on and on.

“Watch this space for a book that tells the actual truth will come and how we can develop our socialist policies for the Many.

“Keep your money for a worthwhile book!”

Her tweet comes as a new book – to be released in September – suggests Mr Corbyn could not empathise with the Jewish community, because it is too “prosperous”.

The book, “Left Out: The Inside Story of Labour under Corbyn”, is due to be released on September 3 and was written by journalists Gabriel Pogrund and Patrick Maguire.

It is not the first time Mrs Alvarez, a former banker, has waded into politics.

In 2019, she posted a series of gleeful comments on Facebook after Tony Blair’s former spin doctor, Alastair Campell, was thrown out of the party for voting Lib Dem in the European elections.

Writing on a Facebook page named “Good riddance”, Mrs Alvarez said: “The man who supported the illegal war in Iraq has gone.”

And in a post on a pro-Corbyn group discussing former Deputy leader Tom Watson’s pursuit of a second referendum, she said: “Alastair Campbell always sabotaged the leadership of the LP [Labour Party], but now he moved to support the Liberal Democrats.”

Ending her attack with an accusation Mr Blair’s former right-hand-man is right-wing, she said: “Maybe he can help them to develop more austerity policies.”

Mr Campbell hit back and accused Mr Corbyn and his wife of rewriting history to ignore his support for leaders going back decades.

He said: “I guess ‘always sabotaged the Labour leadership’ means that chez Corbyn, Foot, Kinnock, Smith, Blair, Brown, Miliband have all been excised from the history books.

Mr Corbyn’s third wife, who is 20 years younger than the Labour leader, first came across the Islington MP in 1999 when he helped track down her niece after she was abducted.

Ms Alvarez’s sister Marcela was living in London when her estranged husband abducted their young daughter and moved to America.

Marcela contacted the now late Labour veteran Tony Benn for help and he in turn introduced her to the local MP: Mr Corbyn.

Marcela told the Daily Mail: “He made calls and did everything he could to help.

“Without his assistance I would never have been reunited with Jasmin.”

Laura Alvarez flew from Mexico to support her sister and met the Labour leader at a fund-raiser in a Finsbury Park pub.

Her sister added: “Because of our case he met my sister and they fell in love. I introduced them.”

While Mrs Alvarez’s siblings and parents attended the ceremony and champagne reception, it is understood that Mr Corbyn was accompanied by a single friend, and none of his family.