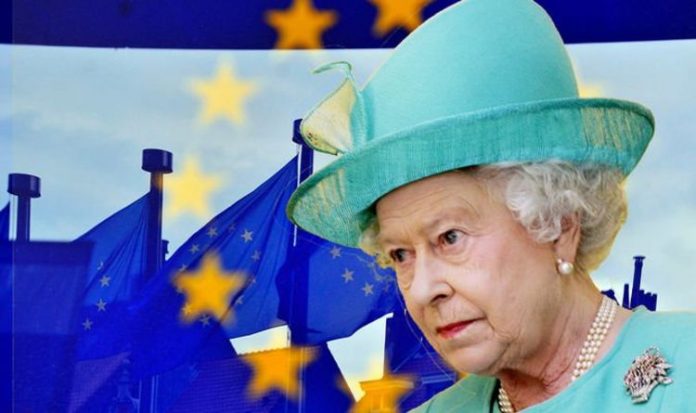 As head of state, the Queen has to remain strictly neutral when it comes to political matters. Dubbed “Elizabeth the silent”, the longest-reigning monarch in history appears to be devoid of partisan opinions, ostensibly at least. For example, she has never given a press interview and meetings with her have to be kept confidential.

She does not vote or stand for election but she does have important ceremonial and formal roles in relation to the Government.

Of course, it is not always that simple and there have been a number of occasions the Queen has accidentally let her political views slip out.

Like everyone, Her Royal Highness has her own views, incentives, and interests.

One instance occurred in 2011 when she appeared to make an “unconstitutional” claim about the expansion of the EU at a Christmas party.

Joan Smith, an author and broadcaster, who was at the time dating Mr MacShane, a former Europe Minister, recalled her time with the monarch, saying: “I was present when the Queen made a comment that was both reactionary and unconstitutional.

“It was at a Christmas party at Buckingham Palace. It was mostly MPs and ex-ministers.”

Ms Smith, who allegedly refused to curtsy for the monarch and the Duke of Edinburgh, added: “Before the Queen came in, a small group of us were asked to stand in the corner and wait to be introduced.

“I smiled and said, ‘Hello’ and she looked at me with almost disbelief and passed on to the next person.

“It was a nice Conservative MP and his wife, who, he said, was Turkish. She immediately said: ‘Philip and I have been on a state visit to Turkey.’

“The woman was very polite and said how pleased people were that she had visited.

“Then, the Queen turned to another person in the group and said: ‘The EU is getting awfully big with 28 countries.’”

JUST IN: Meghan struggled to pick between William and Harry in interview

“They said that, actually, it was 27, ‘but we are hoping Turkey will come in soon’, to which the Queen said, ‘Oh, we don’t want Turkey to come in for a long time.’”

Ms Smith claimed she thought it was very “rude” of Her Majesty.

Buckingham Palace declined to comment, but a courtier told the Telegraph: “While it is not beyond the realms of possibility that Her Majesty made such a comment, it may have been taken out of context.

“The Queen has a good relationship with Turkey and Ms Smith is, I believe, a prominent republican.”

Since 2016 accession negotiations between Turkey and the bloc have stalled.

Brussels has accused and criticised Turkey for human rights violations and deficits in the rule of law.

In 2017, EU officials expressed that planned Turkish policies violate the Copenhagen criteria of eligibility for an EU membership.

The monarch is not the only member of the Royal Family to have made political comments, particularly regarding Europe.

Princess Diana and Prince Charles in Paris in 1988 (Image: GETTY)

In a report by the Bruges Group unearthed by Express.co.uk, Prince Charles criticised the European Economic Community (EEC) – the precursor to the EU – calling it a “maddening bureaucracy”.

The report reads: “Prince Charles summarised the views of this campaign when he spoke to the French President at dinner on November 8, 1988.

“The current emphasis on standardisation and maddening bureaucratic regulations may be necessary for economic success… to make Europe a practical and romantic possibility.

“I believe we should be careful and not be too missionary.

“After all, Frenchmen are still French; the Italians, Italian; and the British, very British – perhaps too British sometimes for French tastes.”

The dinner was hosted by French President Francois Mitterrand as Charles made an official visit to Paris with Princess Diana in November 1988.