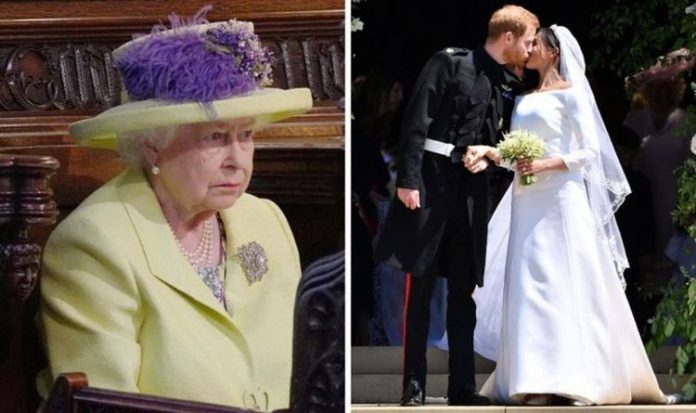 Meghan Markle and Prince Harry tied the knot on May 19, 2018, after dating for less than two years. The ceremony was attended by members of the Royal Family, celebrities and a host of other guests. Over two years on from the special day, a celebrity biographer has described how the Queen reacted when the couple stood at the altar of St George’s Chapel.

Sean Smith, who has written biographies on Robbie Williams, JK Rowling, Tom Jones and Kate Middleton, has dedicated his latest book ‘Meghan Misunderstood’ to the Duchess of Sussex.

The biography details her fairytale wedding to Prince Harry and even documented the “priceless” reactions of members of the Royal Family, including the Queen’s.

Mr Smith wrote: “When I had watched Harry and Meghan’s wedding in May 2019 – less than eighteen months earlier – the most memorable elements for me were her mother Doria’s quiet grace, the exquisite playing of cellist Sheku Kanneh-Mason, the Kingdom Choir singing ‘Stand By Me’ acapella and the long, passionate sermon by the Most Rev Michael Curry on the power of love.

“As he spoke, the reactions from the Royal Family that we were allowed to see were priceless.”

He described the royals as being “fascinated”, “pompous”, “gobsmacked” and amused.

But Mr Smith said the monarch gave very little away.

He said: “The Queen had the familiar look of grim determination that was never going to waver.”

JUST IN: Kate Middleton beats Queen and Meghan Markle as most stylish royal

At one point the brooch formed part of the tiara, but it is detachable.

Prince Philip, the Duke of Edinburgh, accompanied the Queen for the televised ceremony.

He looked well in a smart three-piece suit, with a pale blue tie and white rose.

Following their exchange of vows, Meghan and Harry took a carriage ride through Windsor.

The Royal Family gathered on the steps of St. George’s Chapel to wave Harry and Meghan off on their procession.

The couple then shared their first kiss as a married couple.

Meghan Misunderstood by Sean Smith (HarperCollins, £16.99) is out now.