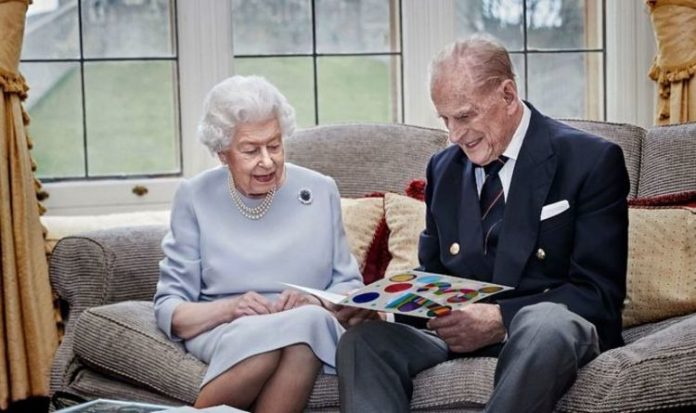 The Queen made the poignant decision to wear the Chrysanthemum Brooch in the portrait Buckingham Palace released yesterday evening to mark the monarch and the Duke of Edinburgh’s wedding anniversary. With this choice, the monarch showed a continuity in her love and support for Prince Philip, as she has donned this same brooch in key moments of their relationship.

The monarch wore this jewel more than seven decades ago, in photographs taken during their honeymoon at Broadlands.

The newlyweds spent a few days at the Hampshire property owned by Lord Louis Mountbatten deerstalking and walking the Queen’s beloved corgi, Susan.

They later continued their honeymoon travelling to Birkhall, the hunting lodge on the royals’ Scottish Balmoral Estate.

The monarch decided to don it again in a family portrait taken a few months after Princess Anne’s birth in October 1950.

The Queen wore the Chrysanthemum Brooch also 13 years ago, in portraits marking her and Prince Philip’s Diamond Wedding Anniversary.

On the day of their 60th wedding anniversary, the couple also attended a service of thanksgiving at Westminster Abbey, where they married on November 20 1947.

Prince Philip also wore an accessory to his outfit filled with significance – a tie linked to the Royal Navy.

The Duke of Edinburgh actively served in the Navy between 1939 and 1952.

Following the unexpected death of King George VI in February 1952 and the ascension to the throne of the Queen, the Duke left the Navy to dedicate himself full-time to public office.

This year, the Queen and Prince Philip will spend their wedding anniversary privately at Windsor Castle, where they are self-isolating with a small number of staff members.

However, the portrait recently released, shows their extended family remain close to the elderly royals.

In the picture, Prince Philip is holding a card made by Prince George, Princess Charlotte and Prince Louis, Kate and Prince William’s children.

Other cards sent ahead of their wedding anniversary are scattered on the table in front of the smiling monarch and her husband.

The brooch features sapphires and diamonds set in platinum to form a chrysanthemum design.

The monarch was gifted it in 1946, when she launched the oil tanker named British Princess.

Following Prince Philip’s retirement in August 2017, the couple spent several months apart, with the Duke living at Wood Cottage while the monarch was working at Windsor Castle or Buckingham Palace.

However, the pair have been together since March 19, when they both reached Windsor Castle ahead of the first national lockdown to spend it securely together.

The pair remained in Berkshire until early August, when they travelled to Balmoral and spent a few weeks in Scotland, visited by a few royal relatives.

In mid-September, the Queen and Prince Philip travelled to Norfolk, where they spent a few weeks privately at Wood Cottage.

In October, the Queen returned alone to Windsor to resume her work – but was joined again by her husband a few weeks later ahead of the second national lockdown.