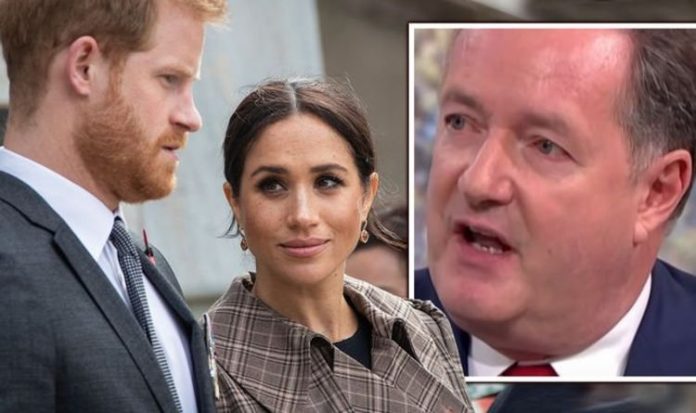 Since stepping down as senior royals in March and moving to the US, the couple have been working towards this moment to officially launch the website and the philosophy behind their organisation Archewell. Today they set out their goal to “build a better world” as they effectively launched the website of their non-profit organisation Archewell. Harry, describing himself as “my mother’s son”, issued a joint statement with wife Meghan inviting people to join their campaign to make a difference “one act of compassion at a time”.

However, Piers ripped into the Sussex couple by demanding the Queen remove their titles, ahead of their 12-month royal review in March.

A Twitter user asked the Good Morning Britain host: “You really don’t like them Piers, do you?”

He replied: “No. I think they’re a pair of vapid little wastrels exploiting their royal titles for vast commercial gain whilst doing none of the duty that being a member of the Royal Family entails.

“It’s shameless, shameful & the Queen should stop them doing it by removing the titles.”

The duke and duchess have also announced partnerships between their foundation and several tech and research-focused organisations to pursue their aims.

On the homepage of the Archewell website is a picture of Diana, Princess of Wales with son Harry on her shoulders, while in another monochrome image a young Meghan stands as her mother Doria Ragland crouches down to hug her daughter.

Piers later criticised the couple for failing to mention their fathers in their message.

He wrote: “Sadly, Ginge & Cringe’s “compassion” and “humanity” doesn’t extend to either of their fathers, both of whom have been airbrushed out of this nauseating bilge.”

Other Twitter users shared their fury at the message and pictures, which appeared to make a subtle dig at Harry’s father Prince Charles.

He has carried out charity work over the years, including setting up the Prince’s Trust in 1976 to help vulnerable young people.

One Twitter user wrote: “Just wow! Talk about Compassion: The Prince’s Trust was founded in 1976 by The Prince of Wales to help vulnerable young people get their lives on track.

“It‘s the UK’s leading youth charity, having helped over 950,000 young people turn their lives around. How could he?”

Another user wrote: “They aren’t royals anymore. Nobody cares.”

A third added: “Both have alienated their own families but still have the audacity to preach to the little people about ‘kindness’.”

In a joint statement, which is called a “letter for 2021” which overlays the pictures, the couple say: “I am my mother’s son. And I am our son’s mother. Together we bring you Archewell.

“In the face of fear, struggle and pain, it can be easy to lose sight of this. Together, we can choose courage, healing, and connection.

“Together, we can choose to put compassion in action.

“We invite you to join us.

“As we work to build a better world. One act of compassion at a time.”