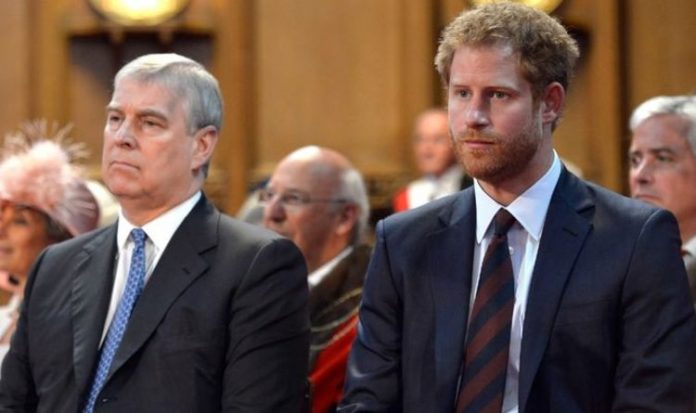 The Queen is facing backlash for her “unbelievable” decision for Prince Harry to give up his honours and patronages while Prince Andrew retains his own. This comes after the Duke and Duchess of Sussex confirmed to the monarch that they would not be returning as working royals. Royally Obsessed podcast hosts Roberta Fiorito and Rachel Bowie discussed the “strange choice”.

Ms Bowie told listeners: “Other non-working royals do have honorary and military titles so that makes this feel like a strange choice.

“Prince Michael of Kent does, and so does Andrew.

“He still has his honorary titles and patronages.

In November 2019, the Duke of York stepped back from his public duties “for the foreseeable future”.

This came after the backlash to a BBC interview in which he spoke about his association with convicted paedophile, Jeffrey Epstein.

Upon stepping down, Andrew also withdrew from all 230 of his patronages.

However, he was allowed to continue to hold a number of military honours such as Commodore-in-Chief of the Royal Navy’s Fleet Air Arm and Colonel-in-Chief of multiple British Army units.

She added: “So I think everyone would have felt so good if there was some sort of compromise.

“If Harry was able to come and participate in Trooping the Colour, and these kinds of bigger events.

“Laying a wreath for Remembrance Day for example.

“We would just feel so great to see things like that where the family was able to figure something out.

“Instead, we have this, and I can’t imagine how Harry and Meghan feel.”