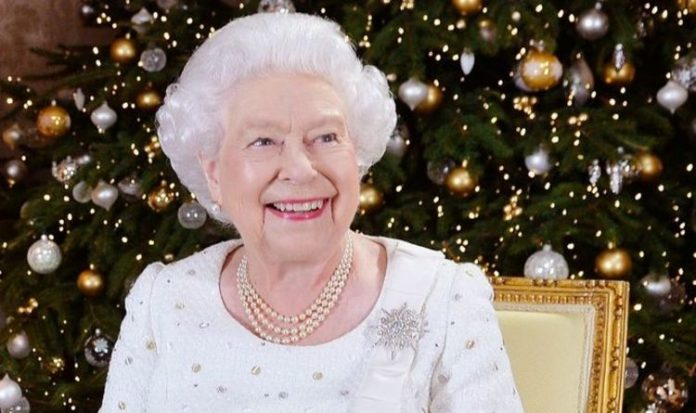 The Queen could pay homage to the wedding of Princess Beatrice and Edoardo Mapelli Mozzi on Christmas Day by placing their picture on her desk while delivering her annual speech, according to a royal commentator. Richard Fitzwilliams told Express.co.uk: “I doubt that this year there will be much about her family and Harry and Meghan’s stepping down as senior working royals in January is unlikely to feature.

“There may well be a photograph from Beatrice’s wedding in July.”

Princess Beatrice’s secret wedding was one of the highlights for the Queen in 2020.

The eldest daughter of Sarah Ferguson and Prince Andrew was due to marry property tycoon Edoardo in May, but the coronavirus pandemic and regulations in place forced the couple to postpone their nuptials.

The wedding, which was already meant to be a private affair, was celebrated on July 17 in front of only a handful of guests – including the Queen and Prince Philip.

The Queen’s Christmas speech is set to be broadcasted at 3pm on Christmas Day (Image: GETTY)

The Queen will spend Christmas at Windsor Castle this year (Image: GETTY)

Mr Fitzwilliams believes Kate and Prince William are also likely to be featured in the Queen’s Christmas speech following their tour across Great Britain via Royal Train.

He said: “The marvellous morale-boosting tour in the Royal Train William and Kate have undertaken will undoubtedly be included.

“It shows what dedicated, senior working royals can do to thank those who have done so much for our society in a grim and unprecedented year.”

However, Mr Fitzwilliams expects the Queen’s main focus to be on the pandemic, how 2020 has been a difficult year for the country and the hopes for the future given by the vaccines against COVID-19.

He said: “Given the seriousness of the pandemic which has gripped the whole country since March, I think that this year the Queen is likely to deal with some of its effects and particularly, since optimism is so important during what will be a difficult festive season for many, the future that beckons since we now have vaccines.

“Her messages to the nation about the pandemic and on the 75th anniversary of VE Day, which she may well refer to, were morale boosters in a truly grim year.

The Christmas speech gives the Queen the chance to address the country directly (Image: GETTY)

The Queen usually writes her Christmas speech in early December.

However, this year it was rumoured the monarch had pushed back completing her speech by a few weeks.

claimed in mid-December the monarch could have delayed signing off her speech to know the outcome of the Brexit negotiations and tweak her address accordingly.

A source told the newspaper: “Normally she films it in early December, certainly by the middle of the month, but this time it’s later than usual.”

The Queen ascended to the throne in 1952 (Image: GETTY)

The Christmas Day speech, which is always broadcasted at 3pm, gives the monarch the rare opportunity to directly address the nation in her own words.

This year, the Queen delivered two other speeches personally penned to the country.

In early April, as the country was in the midst of the first national lockdown, the Queen thanked key workers and people abiding by the rules.

And, boosting morale, she also reminded the country the whole world was fighting against the same enemy, adding with certainty the coronavirus would end and “we will meet again”.

The Queen will self-isolate with Prince Philip over the festive period (Image: GETTY)

In May, the Queen also marked from her home in Windsor the 75th anniversary of VE Day.

In another powerful speech, the Queen recalled her own memories of the day while also paying tribute to her beloved father.

This year, due to the ongoing pandemic, the Queen is breaking with a tradition started in 1988 and won’t travel to Sandringham to host a large gathering with many family members.

Instead, Buckingham Palace has confirmed in early December, she will spend Christmas Day quietly with her husband of 73 years, Prince Philip.