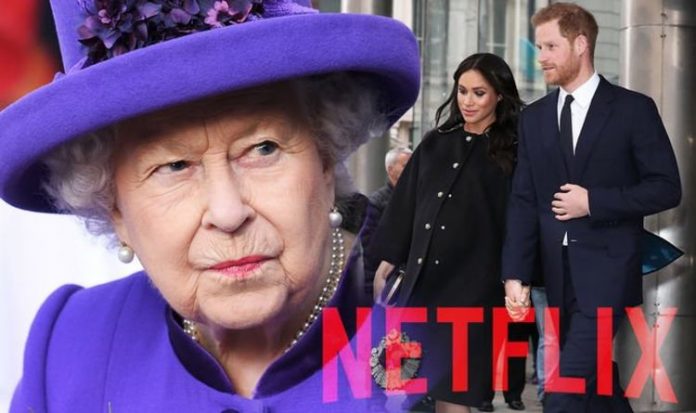 The Duke and Duchess of Sussex announced yesterday they had signed an exclusive deal to produce documentaries, feature films and scripted shows for Netflix, which has more than 193 million subscribers worldwide. But many royal fans have reacted furiously to the news, and urged the Queen to strip Meghan and Harry of their official titles.

Dozens took to social media claiming the couple are capitalising on their royal links, to gain lucrative financial contracts such as the Netflix deal.

One person wrote: “Why are Harry and Meghan still being called the Duke and Duchess of Sussex?

“Didn’t they quit the Royal Family, and the royal duties.

“They should be stopped using the title to make millions.”

Another user said: “If she wants to work with Netflix, that’s fine, but she should drop the title.

A third fumed: “They’ve moaned about royalty and the associated pressure but Netflix wouldn’t have given them the time of day if they weren’t the Duke and Duchess of Sussex.”

Another person wrote: “They chose a life outside Britain and outside the Royal Family.

One person claimed the couple are very unpopular in Britain, and the Netflix deal has added fuel to the fire.

They wrote: “Netflix does not seem to realise how unpopular Meghan Markle is in Britain.

“She took a title and then made her way back to California in an attempt to capitalise on that title.

“She is a user and the Brits know it.

“She wants to have a British title but abandoned Britain quickly.”

When Meghan and Harry stood down as senior royals earlier this year, they were told they could no longer use their HRH (His Royal Highness/Her Royal Highness) titles, but they would still be known as the Duke and Duchess of Sussex.