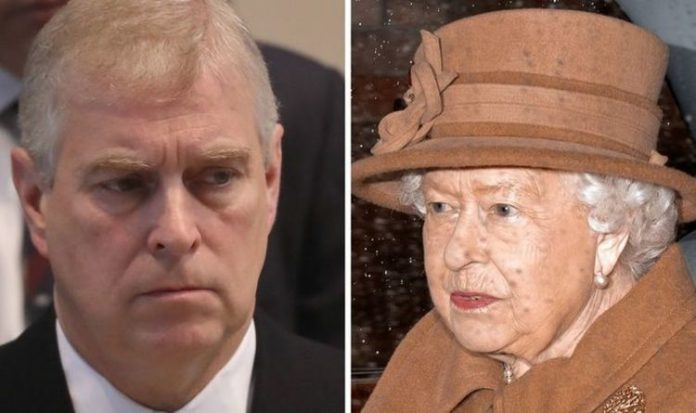 Princess Beatrice and husband Edoardo Mapelli Mozzi surprised Royal Family fans by revealing they had wed in secret during the coronavirus lockdown, in front of a small group of around 20 close friends and family. This, coupled with her sister Princess Eugenie’s announcement that she was expecting her first child with Jack Brooksbank, sparked a wave of excitement regarding the Royal Family at a time when they had appeared to be struggling. Coupled with members of the Firm contracting COVID-19, the fallout of Prince Andrew’s controversial friendship with convicted paedophile Jeffrey Epstein continued to dominate royal conversation.

The saga appeared to carry on when Prince Andrew was then “erased” from the official royal photographs released following Beatrice’s nuptials earlier this year.

In the pictures handed out, Beatrice appeared alongside Edo in one, and the Queen and Prince Philip in another.

She explained the decision to use the Queen and Philip with Beatrice and Edo was also a “useful signal” that the Queen remained head of the family, and was back in action after being sidelined by the pandemic.

Ms Tominey said: “Clearly, there has been a collective decision taken that he should not feature in the imagery of this historic moment for the bride and groom and that is rare.

“We see the parents is most of the official photographs from royal weddings that are released by members of the family.

“That it’s just been a picture of the couple, and that lovely photograph of the couple with the Queen and Prince Philip, it is a useful signal for Buckingham Palace to send out.

One friend claimed they are “exceptionally close”, adding that the moment Beatrice asked the Queen to borrow a dress “was touching for both of them”.

The wedding was originally scheduled for May 29, but due to COVID-19 restrictions, it was pushed back again, allowing the Queen and husband Prince Philip to attend.

The friend concluded in a report by PEOPLE: “It was all about the Queen’s schedule.

“The Queen was the guest of honour, and it was very important that she was there.”

Beatrice enlisted Eugenie as her Maid of Honour, the same role her sister bestowed upon her when she married Jack in 2018.