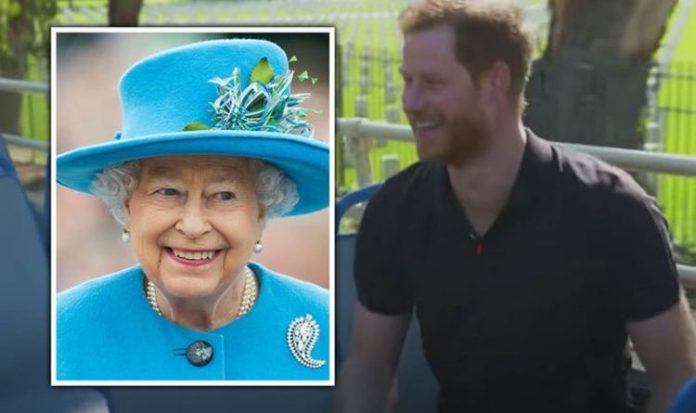 The Queen has remained in touch with Harry and Meghan Markle after they decided to step down as senior royals. And, thanks to video calls, the monarch has been able to see how fast Archie is growing in his new home in Montecito, California, Prince Harry told James Corden as he appeared in his show.

During one of these Zoom calls last year, the monarch asked Meghan and Harry what Archie wanted for Christmas, the Duke of Sussex recalled.

Speaking to his friend and TV host Mr Corden, Harry said: “Interestingly, my grandmother asked us what Archie wanted for Christmas and Meg said ‘waffle maker’.

“She sent us a waffle maker for Archie, so at breakfast now Meg makes up a beautiful organic mix in the waffle maker, flips it, out it comes. Archie loves it.

“And now I have waffles for breakfast, a bit of yoghurt, bit of jam on top – don’t know if that’s the right thing to do – put berries maybe, bit of honey, maybe some syrup.

“Archie wakes up in the morning and just goes ‘waffles?'”

Prince Harry spoke in awe about his son, saying he is “hysterical”.

Asked how he is finding fatherhood, the Duke said: “My son is now just over a year and a half, he is hysterical, he’s got the most amazing personality, he is already putting three-four words together, he is already singing songs.”

Since his birth, Meghan and Harry have been careful to protect the privacy of their child.

Breaking with a royal tradition started by Princess Diana in 1982, Prince Harry and Meghan did not introduce their son to the world on the steps of the hospital where the Duchess gave birth but waited for two days before holding a photo call with a restricted number of journalists.

The Duke and Duchess also never revealed the names of Archie’s godparents.

Archie was last in the UK in November 2019, when he travelled with his parents to Canada for an announced six-week break.

The Duke and Duchess returned to London in early January 2020 to visit Canada House and a few of their patronages – but their son remained in British Columbia.

On January 8 Meghan and Harry issued a statement saying their intention to step back as full-time working royals and, after this announcement, Meghan flew back to her son while the Duke remained in the UK to discuss the terms of Megxit.

The couple returned to the UK for the last time as senior royals in March last year, when they carried out several engagements and met with their patronages and charities.

Once again, they decided to leave Archie in Canada to spare him a transatlantic trip.

On Valentine’s Day, Meghan and Harry announced their son is due to have a sibling later this year.

Sharing the happy news of their pregnancy, a spokesperson said: “We can confirm that Archie is going to be a big brother.

The statement was accompanied by a picture taken remotely by photographer Misan Harriman.

In it, the Duke is sitting under a tree barefoot, smiling at Meghan who has her head on his lap.

The Duchess dons a Carolina Herrera dress under which her baby bump can be seen.

Meghan and Harry did not disclose when the baby is due, but royal experts believe it could arrive in the summer.

Meghan and Harry were expected to travel across the pond in June to mark Prince Philip’s 100th birthday and Trooping the Colour.