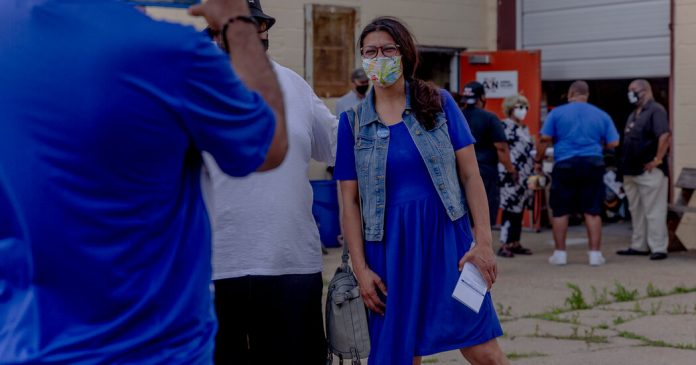 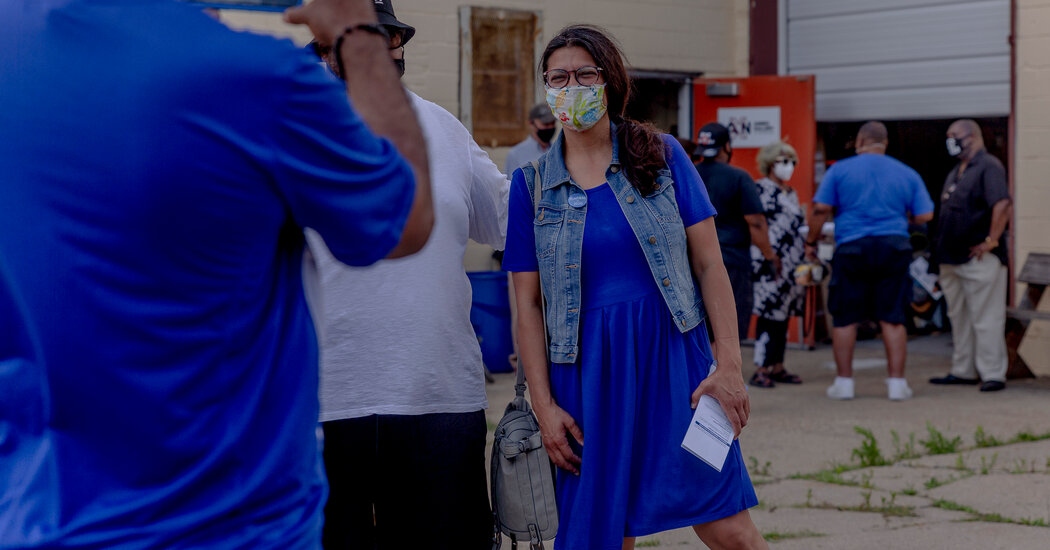 DETROIT — Representative Rashida Tlaib, a first-term Michigan Democrat who rocketed to national attention as a vocal critic of President Trump, is fighting for her political life, locked in a close primary race that could be decided by a few hundred mail-in ballots.

One of the first Muslim women elected to the House of Representatives, Ms. Tlaib on Tuesday faces a rematch against Brenda Jones, the Detroit City Council president who Ms. Tlaib narrowly defeated in 2018.

It’s a sequel that many more people are likely to be watching. Ms. Tlaib’s prominent role in Washington has translated to more resources for her district, supporters say, and in this contest it’s enabled her to significantly outspend her opponent on advertising.

It’s also given Ms. Jones an argument against her: that spending time criticizing the president limits the kind of compromises necessary to get the most done for the people who sent her to Washington. And the contest, taking place amid national protests against racial injustice, finds people in this majority-Black district asking themselves whether Black voters must be represented by Black politicians to really be heard.

Ms. Tlaib, 43, came to Washington as a member of “the squad,” a group of four progressive women of color elected in 2018 who became frequent targets of Mr. Trump, who has attacked them as foreigners who do not love the United States. (All four are American citizens, and only one, Ilhan Omar, was born outside the country.)

For over 50 years, the district, which includes a portion of Detroit and a handful of surrounding suburbs, was represented by John Conyers, a civil rights icon. Some supporters of Ms. Jones, who is Black, have said that she would be a better fit for the district than Ms. Tlaib, who is Palestinian by descent.

Ian Conyers, a former state senator and great-nephew of John Conyers who ran against Ms. Jones in a special election in 2018 and endorsed her this year, argued that her community ties would help her forge better relationships in Washington.

“From your work in the community, you’re able to directly talk to people who already have a working relationship with you,” he said in his endorsement. “You just can’t make up that experience overnight.”

Ms. Tlaib’s supporters, however, reject the idea that she is not an effective advocate for her district.

For Kim McDade, 58, of Highland Park, a Detroit suburb, the information coming from Ms. Tlaib’s office on the coronavirus has been invaluable. “She’s had a couple of town halls and she always calls or texts to let us know about those,” said Ms. McDade. “It’s been very informative and she also shares the sites where we can get tested.”

Speaking on Saturday under a tarp held aloft by a group of supporters to shield her from a sudden downpour, Ms. Tlaib tied her criticisms of the president to local concerns about over-policing.

“I’m not going to allow this impeached president to come into my community,” she said to protesters attending a march organized by Detroit Will Breathe, a group started after the killing of George Floyd by the police. “He thinks he can send these federal agents and troops into our community on our watch. To think that he’s going to come in and do this to us. No.”

Ms. Tlaib caught the attention of Mr. Trump the day she was sworn into office in January 2019, when she used an expletive to say she would work to impeach him. She has been the target of the president’s wrath ever since, and her criticism of him won her national attention. But it also prompted Ms. Jones to jump into the race earlier this year.

“It’s so important to me that we unify the district. Sixty percent of the district is African-American, but it’s not about race, it’s about bringing home the bacon,” Ms. Jones said during a recent virtual town hall. “The money we bring home is so important to me, and I’m able to work with those who I don’t always agree with.”

Ms. Jones, 60, has good name recognition in the district from her 15 years on the City Council, as well as the five weeks she served in Congress in 2018 after winning the special election, which was held to fill the remainder of Mr. Conyers’ term after he retired amid accusations of sexual harassment from former staffers.

In the four-way Democratic primary to complete the rest of Mr. Conyers’s term, Ms. Jones easily won the portion of the district in Detroit and held her ground in the suburbs, edging out Ms. Tlaib by about 1,600 votes, out of about 87,000 cast. But in the six-way Democratic primary for the next full two-year term, which was held concurrently with the special election, Ms. Tlaib narrowly won, beating Ms. Jones by about 900 votes, out of about 89,000 cast.

Observers expect Tuesday’s primary to be close as well. But Michigan voters may not know the winners of this and many other races on election night because of a surge in absentee voting.

In the Third Congressional District, a Republican stronghold in Western Michigan that has been trending blue in recent years, five Republicans are vying for the nomination to replace Representative Justin Amash, a former Republican who left the party and briefly considered running for president as a libertarian before deciding to retire.

And in the reliably conservative 10th District, which spans several counties north of Detroit, three Republicans and two Democrats are running to replace Paul Mitchell, who also decided not to run for re-election.

The race between Ms. Tlaib and Ms. Jones, by far the most prominent, has been characterized by the candidates’ differing campaign styles and disparities in resources.

Ms. Tlaib has emphasized in-person appearances, canvassing door to door and attending community events. She has won the endorsement of several labor unions, as well as Nancy Pelosi, the speaker of the House. And she has raised about $3 million, significantly more than Ms. Jones, allowing her to dominate the airwaves in metro Detroit.

“I’ve watched a few of those town halls and some attracted a lot of people, but others didn’t,” said Mario Morrow, a political consultant in Detroit. “One of the people I see most in Southeast Michigan is Rashida Tlaib, and she usually has a bullhorn in her hand. I think she’s on her way back to Washington.”

Ms. Jones, who contracted Covid-19 in April and recovered, has limited her campaign to virtual town halls and Zoom calls. She has also been hampered by anemic fund-raising — she has raised just $165,000, coming into a campaign that still had debt from the 2018 race.

She has remained competitive thanks in part to the endorsements of the other candidates in the 2018 contest, as well as a large group of influential Black ministers in the city, including the Rev. Wendell Anthony, the president of the Detroit chapter of the N.A.A.C.P.

“I’ve known Councilwoman Jones as a very solid person who does what she says she’s going to do,” Reverend Anthony said. “Following the tenure of Congressman John Conyers, an icon for all of us around here, there’s a legacy that comes with that, and Congresswoman Jones would bring that back and sustain that.”

The race may ultimately come down to whether Ms. Jones’s focus on establishment-style retail politics is enough to match Ms. Tlaib’s ability to excite voters.

Glenda McDonald, 59, who works at a charter school in Highland Park, said she appreciated Ms. Tlaib’s “in-your-face” style, if not always the language that the congresswoman uses.

And while Ms. McDonald, who is Black, has taken heat from some friends for supporting Ms. Tlaib instead of Ms. Jones, she said skin color was not a factor in her choice.

“Most people think that the district’s seat belongs to someone else,” she said. “But I choose who I want to choose. The person who represents me should represent everybody.”

The post Rashida Tlaib Beat Her Primary Opponent by 900 Votes in 2018. How Will the Rematch Go? appeared first on New York Times.