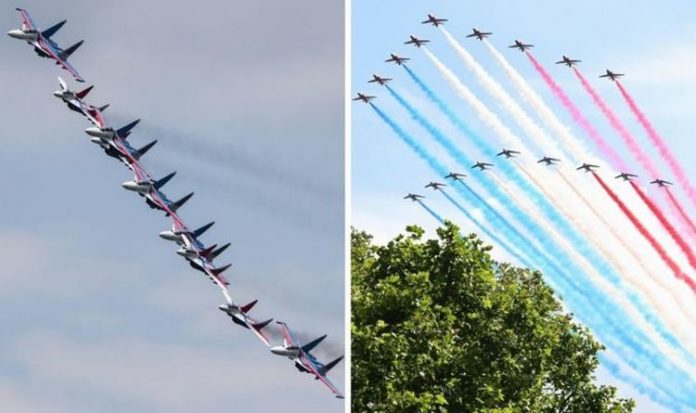 The famous Red Arrows are one of the world’s premier aerobatic display teams. The Red Arrows will soon be flying over Britain to commemorate the historic occasion of VJ Day. Express.co.uk has compiled a guide to show when Britons may be able to see the iconic trail of red, white and blue in the British skies flying around the UK.

What is VJ Day?

VJ Day, also known as Victory over Japan Day, will be commemorated on August 15, 2020.

This year will be the 75th anniversary of VJ Day, marking both the surrender of Japan and the end of the Second World War.

During WWII, Japan continued fighting for more than three months after the German surrender.

The United States was planning to invade the country during which at least 500,000 American soldiers were expected to die.

Japan was forced to surrender after the US dropped two atomic bombs on the country in Hiroshima and Nagasaki in early August 1945.

As many as 226,000 people were killed when these atomic bombs were dropped.

The official US celebration of VJ Day takes place on September 2.

This is because September 2, 1945, was the date when the surrender document was signed, officially ending World War 2.

August 15 instead marks the moment Imperial Japan surrendered in WWII.

When is the VJ Day Red Arrows display?

Several celebrations will take place across the country.

Celebrations will begin at sunrise with lone pipers playing “Battle’s O’er” at sunrise at HMS Belfast in London and at dawn in India, Australia, New Zealand and Nepal.

A service of remembrance will be broadcast on BBC One between 9.30am and 11.30am.

Prince Charles and Camila, Duchess of Cornwall, will then lead national tributes marking VJ Day on Saturday with a two-minute silence at the National Memorial Arboretum in Staffordshire, which will be followed by an RAF flyover.

The Red Arrows will fly across the country, passing Edinburgh, Belfast, Cardiff, and London, where they will fly over the Royal Hospital Chelsea.

The Royal Hospital in Chelsea was home to three veterans of the war in Burma.

READ  Coronavirus latest: One in five people in UK have had COVID-19 | UK | News (Reports)

No time has yet been confirmed for the flypast.

However, on the 75th anniversary of VE Day back in May, the Arrows flew over London at 10.10am.

To conclude, a VJ Day remembrance service, VJ Day 75: The Nation’s Tribute, will be held, led by the Duke of Cambridge at Horse Guards Parade.

This service will then be broadcast on BBC One at 8.30pm.

The service will feature several famous faces such as Hugh Bonneville and Sheridan Smith perform key moments from the conflicts.