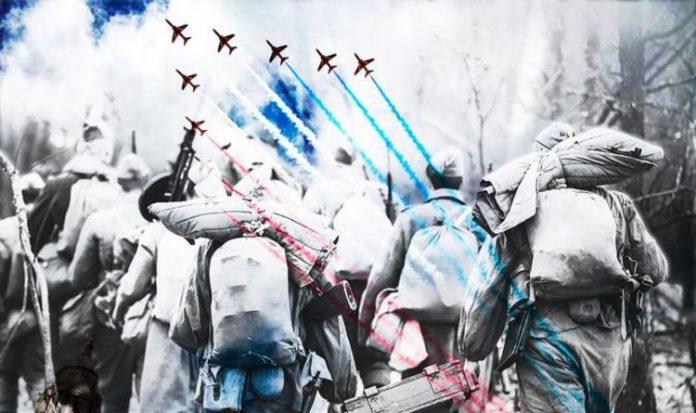 VJ Day brought an end to World War II after the US dropped nuclear bombs on the Japanese cities of Hiroshima and Nagasaki on August 6 and August 9, 1945, The Soviet Union also declared war on Japan on august 9, and launched the Soviet invasion of Manchuria on the same day as the second bomb was dropped on Nagasaki. 1.5million soldiers travelled south and invaded the Japanese state of Manchuko alongside the Mongolians. As a result, Emperor Hirohito announced Japan’s acceptance of the terms of the Potsdam Declaration on August 15, which outlined the terms of Japan’s surrender.

Now, the event is commemorated every year for its historic significance and bringing an end to one of the worst wars in human history.

This year, The Duke of Edinburgh, who was present in Tokyo Bay for the signing of the agreement in September 1945, will feature in a montage of veterans of the Pacific theatre, which will be shared on social media and on large screens all over the UK.

The Red Arrows will also be conducting a UK wide flypast tribute over Edinburgh, Belfast, Cardiff and London with its path including The Royal Hospital Chelsea, home to three Burma Star recipients.

It is not known at what time the flypast will be, but it is the first of its kind since the London 2012 Olympic and Paralympic games.

The two minute silence will be led by Prince Charles and Camilla, Duchess of Cornwall this year.

The Government website states: “The Prince of Wales, accompanied by Her Royal Highness The Duchess of Cornwall, will lead the UK in a national moment of remembrance and thanksgiving for all those who served in the Far East.

“His Royal Highness will lead a two minute silence at 11am at the National Memorial Arboretum in Staffordshire as part of a special televised service.

“A number of veterans, including 93-year-old Albert Wills who served in the Royal Navy aboard HMS Indefatigable, will be present at the service to pay their respects to their fallen comrades.”

Town Criers and Church representatives read out the Cry for Peace at 11.10am local time.

Following the Cry for Peace, participating churches will ring their bells 75 times, one ring for each year since VJ Day.

A special programme, The Nation’s Tribute, will be broadcast on BBC One.

The program will feature a re-telling of the story of Victory over Japan with tributes led by the Duke of Cambridge.

The Government website reads: “The Duke of Cambridge will feature in ‘VJ Day 75: The Nation’s Tribute’, a special programme filmed at Horse Guards Parade that will be broadcast on BBC One.

“Alongside veteran testimony, the Duke will honour and give thanks to all those who sacrificed so much during World War II.”

The pre-recorded programme, developed with the Ministry of Defence, involves 300 members of Armed Forces personnel.

The Nation’s Tribute will highlight the scope and diversity of the British military in 1945, and include a host of famous faces reading tributes, military bands and dramatic visual projections.