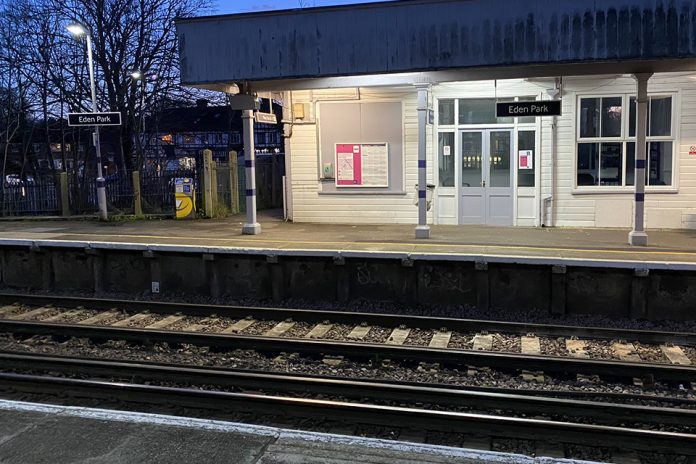 At around 19:05 hrs on Wednesday 26 February 2020, a passenger train struck and fatally injured a person who had just fallen from platform 1 of Eden Park station.

The person, who had impaired vision, moved near to, and fell from, the platform edge probably because his visual impairment meant he was unaware that he was close to this edge. The platform edge was not fitted with markings intended to assist visually impaired people.

Following the accident, emergency services staff were unable to determine whether the third rail traction power supply had been turned off until a member of Network Rail staff arrived on-scene. This resulted in a delay of over 12 minutes between London Ambulance Service staff arriving at the scene and accessing the track to provide medical care.

The combined effect of DfT, ORR, RSSB, Network Rail and Southeastern Railway guidance and processes meant that safety-based justifications for platform edge markings (including tactile surfaces) to aid visually impaired people, were not always effectively considered by the railway industry.

The report makes six recommendations. The first and second are addressed to DfT and Network Rail, firstly to seek improvements in the processes that govern when tactile surfaces at the edge of station platforms should be installed, and secondly to develop a plan for installing tactile surfaces at higher priority locations in a timely manner across the railway network. The third is addressed to the Rail Delivery Group to develop means of reducing the risk to visually impaired people using station platforms where tactile surfaces have not yet been installed. The fourth is addressed to ORR and seeks improvements in the information made publicly available to help visually impaired people to decide whether it is safe to travel. The fifth is addressed to RSSB, to develop processes to ensure that the rail industry has sufficient information, guidance and decision-support tools to fully address the safety risks associated with disabled people using the railway.

Short video summary of the investigation

This tragic accident resulted in the death of someone who had impaired vision and mobility, and relied on the railway to transport him safely. My thoughts are with his family, and others who knew and were close to him, as we publish our investigation report.

Our investigation concluded that the absence of a tactile strip along the platform edge may have been a factor in this accident. These strips are used to provide visually impaired passengers with an indication that they are approaching the platform edge. Eden Park is far from unique: around half of all mainline stations in the UK are also not equipped with this valuable aid to the visually impaired.

Our investigation found that government and the railway industry have policies in place to make rail travel more accessible for people with disabilities. However, there appears to have been no coherent strategy for the provision of tactile strips, despite their obvious importance to visually impaired people who value the opportunity to travel independently, without reliance on staff.

Although RAIB recognises that the immediate provision of tactile strips across the network would be very expensive, there is a need to develop a new policy to guide decision makers. This would inform the development of a programme for installation of tactile strips, particularly at places where the risk is likely to be higher, such as busy unstaffed stations. It cannot always make sense simply to wait until platforms are refurbished to install the strips.

While accessibility has rightly been promoted in recent years, it is important that safety is properly considered when the industry is looking at the arrangements and facilities that they provide for disabled or impaired passengers. The well-established principle that additional measures should be provided to protect rail passengers, where reasonably practicable to do so, applies to all. It is for this reason that we are urging a re-think on the approach to provision of tactile strips to ensure that they are installed where most needed.

READ  London coronavirus lockdown: Tier 3 a matter of 'when not if' as cases SURGE in capital | UK | News (Reports)