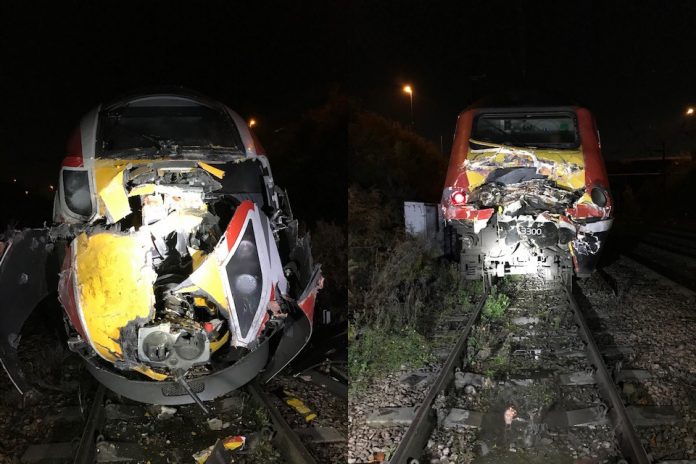 At 21:41 hrs on 13 November 2019, an empty LNER Intercity Express Train, approaching the maintenance depot at Neville Hill in Leeds, caught up and collided with the rear of a LNER High Speed Train moving into the depot. The leading train was travelling at around 5 mph (8 km/h) and the colliding train at around 15 mph (24 km/h). No one was injured in the accident, but the trailing bogie of the second and third vehicles and the trailing wheelset of the fourth vehicle of the Intercity Express Train derailed to the right, by up to 1.25 metres.

The collision occurred because the driver of the Intercity Express Train was focused on reinstating an on-board system which he had recently isolated, instead of focusing on the driving task. This was exacerbated by him unintentionally commanding too much acceleration due to his lack of familiarity with the train.

The driver’s lack of adequate familiarity with the train probably arose because LNER had not recognised that his training needs were greater than for his peers.

The crashworthiness standard used to design the Intercity Express Train did not specifically require consideration of the likelihood of derailment during collisions at lower than the 22.5 mph (36 km/h) specified design speed, nor did it include specific criteria for assessing the derailment performance. As such, the assessment and validation of the design did not identify any issues with these design features.

RAIB has made five recommendations. Two recommendations are addressed to LNER and relate to correcting its understanding of the setup of the train management system and ensuring that the documentation provided by Hitachi has not led to any other safety issues. The other recommendations relate to: