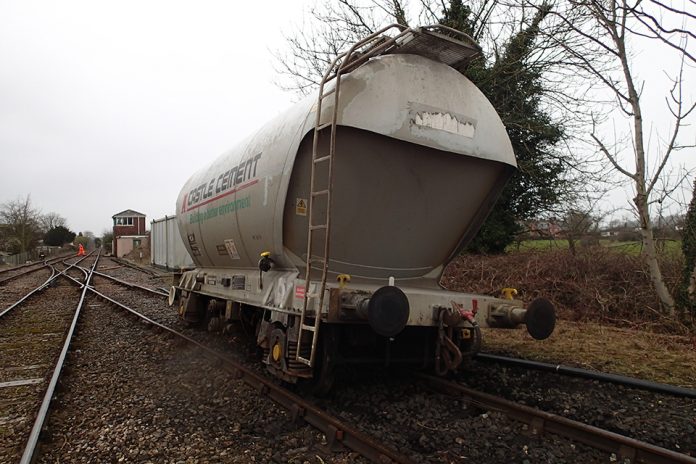 At about 08:16 hrs on 9 March 2020, a loaded wagon ran away from a siding located within the Hanson UK cement works in Clitheroe. It travelled a distance of about 0.75 miles (1.2 km) on a falling gradient, before it derailed at Horrocksford Junction, where the freight only branch line from the cement works connects to the main railway lines.

On arriving at Horrocksford Junction, the wagon derailed at a set of trap points. As intended, this arrangement prevented the wagon from reaching the main lines. The derailed wagon stopped clear of the nearest main line and no trains were nearby at the time of the derailment. No one was injured in the accident, although there was minor damage to the wagon and severe damage to the track where the wagon had run derailed.

The investigation found that the wagon ran away because its handbrake was not effective at holding it in place on the gradient where it had been stabled. This was due to a combination of insufficient brake force being provided by the applied handbrake and the fully laden wagon being stabled on its own and on a gradient falling towards the exit from the cement works. The staff who stabled the wagon did not know the handbrake would not hold the wagon in place after they applied it, as the wagon’s brakes were already pneumatically applied when they did this, and over time, the air in the brake system leaked away until the air brake was released. It is possible that a maintenance examination that was due before the accident, but which was not carried out, would have found the problem with the handbrake’s effectiveness.

An underlying factor was that the parties responsible for the operation of trains at the cement works had not adequately assessed or controlled the risk of a rail vehicle running away from the cement works. RAIB also observed that the risks to users at one of the level crossings concerned were not being managed by Network Rail, and that potential evidence, which might have explained why the handbrake provided insufficient force to hold the wagon in place, was lost to the investigation.

RAIB has made three recommendations. The first is that GB Railfreight should work with the owners of industrial premises to improve its assessment of the risks of runaway vehicles. The second recommends that Hanson UK should assure itself that a suitable and sufficient risk assessment has been undertaken for all rail operations taking place on its site. The third recommendation is that freight operating companies review the adequacy of the processes followed for stabling vehicles on a gradient using handbrakes, particularly if a laden vehicle is to be left on its own. RAIB also identified two learning points. The first is a reminder of the importance of scheduled examinations of wagons taking place on or before their due dates. The second is a reminder about the importance of preserving items of evidence required for safety investigations.