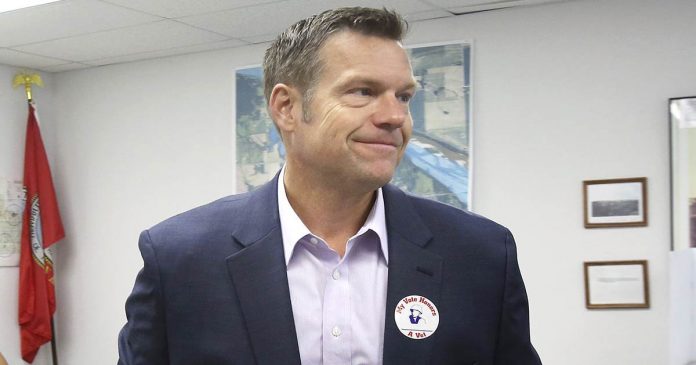 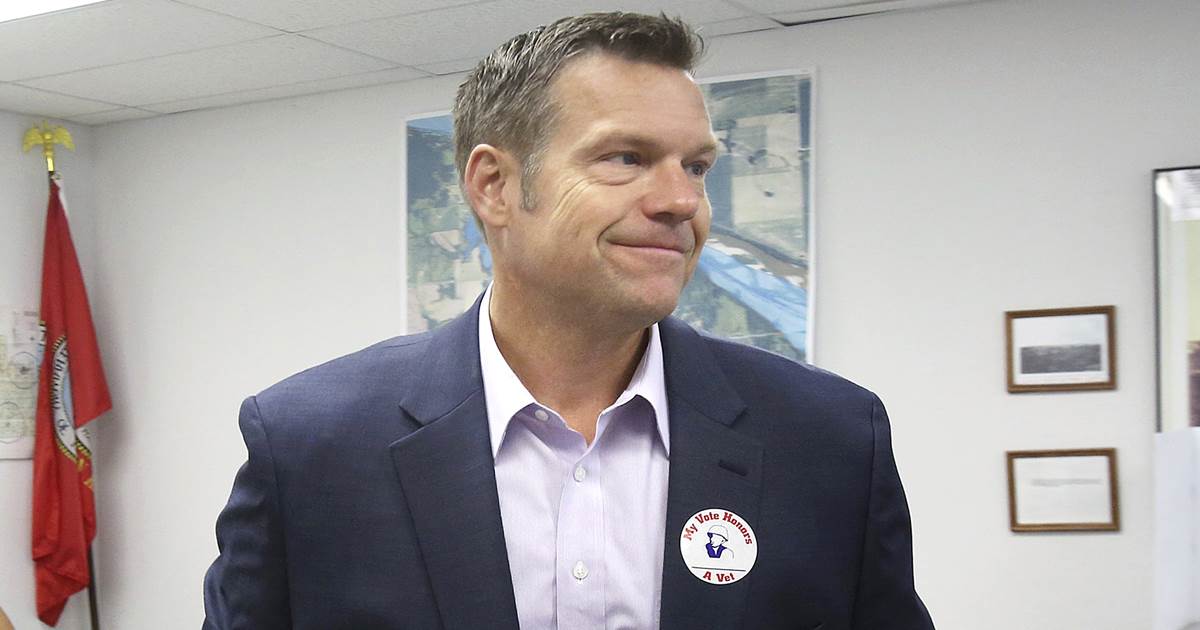 Kris Kobach, the former Republican secretary of state of Kansas who lost his bid for governor in 2018, is now trying to claim a Senate seat there with the help of a Democrat-linked group and without the blessing of GOP party leaders.

Voters head to the polls on Tuesday in Kansas and four other states — Arizona, Michigan, Missouri and Washington — in some of the last primaries left on the year’s election calendar.

Two main combatants have emerged in the 11-candidate Kansas contest — Kobach, the immigration hawk and voter fraud crusader, and Rep. Roger Marshall, a mainstream GOP candidate. The race has raised alarm among Republicans who fear that if a polarizing candidate like Kobach wins the primary he could lose in November, putting their Senate majority at risk. Some Republican had wanted Secretary of State Mike Pompeo to run.

Kobach has a shot against Marshall, said Professor Patrick Miller, a political science professor at the University of Kansas.

“Kris Kobach has spent 20 years defining himself and building his brand for voters,” Miller said. “He has created an image and loyalty with grassroots conservatives that other politicians might be envious of — he has a core chunk of voters who are going to stick with him because they know his track record and his reputation.”

“It’s hard to tear him down,” he added, “because he’s spent two decades building himself self up, and that’s a scary thing for establishment Republicans.”

Miller said there hasn’t been a new poll in the race in over a month so it’s hard to tell who is the clear favorite to win, especially considering the contest has been marked by bitter attacks from super PACs backing both candidates and alleged Democratic meddling.

In recent weeks, a group linked to Democrats has run millions of dollars of ads boosting Kobach and attacking Marshall, who has been endorsed by Sen. Majority Leader Mitch McConnell, R-Ky., and retiring Kansas Sen. Pat Roberts, among other senior party leaders.

President Donald Trump, who tapped Kobach to lead a much criticized and now defunct vote fraud commission early in his administration, has not weighed in on the race.

The likely Democratic nominee in the Senate race, Barbara Bollier, is a state senator and former Republican who, if elected, would be the first Democrat to represent Kansas in the Senate since the 1930s.

Marshall may have a shot, said Greg Vonnahme, an associate professor of political science at the University of Missouri-Kansas City.

Vonnahme noted that as a congressman Marshall represents District 1, a massive swath of western Kansas, which is deeply conservative and contains nearly half the state.

Vonnahme, however, also noted that despite GOP leaders backing a different candidate, Kobach is a “known quantity” in Kansas and has a “base support he can count on.” He said that despite Kobach losing to a Democrat in the general election for governor two years ago, he defeated a GOP establishment candidate during that Republican primary.

“It’s this idea there is this ‘Kobach toll,’” Vonnahme said. “That if you lose that primary, the senate seat becomes competitive for the Democrats.”

Elsewhere, other polarizing Republican candidates have races on Tuesday, too.

Joe Arpaio, who has dubbed himself “America’s toughest sheriff,” is trying to win his old job back as sheriff of Maricopa County in Arizona.

Arpaio, a staunch supporter of Trump, was denied a seventh term as sheriff by voters in November 2016 after he was charged with contempt of court for having ignored a federal judge’s order to stop arresting immigrants solely on the suspicion that they were in the country illegally.

In 2017, Trump pardoned him for a federal contempt of court conviction.

And Democrats are facing challenges in Tuesday’s primaries.

In Michigan, Rep. Rashida Tlaib is competing in a Democratic primary against former Rep. Brenda Jones.

Tlaib was thrust into the national spotlight when she was elected in 2018 to fill the remainder of Rep. John Conyers Jr.’s term. Jones, who narrowly lost to Tlaib in 2018, is president of the Detroit city council.

Tlaib is a member of “The Squad” along with three other progressive Democratic congresswomen, including Reps. Alexandria Ocasio-Cortez of New York, who was also elected in 2018.

In Missouri, Rep. Lacy Clay is being challenged by progressive Democrat Cory Bush in a Democratic primary.

Clay, who was elected to his seat in 2000, defeated Bush in the 2018 Democratic primary. Bush is an ordained pastor and community activist who was involved in the 2014 Ferguson, Missouri, uprising day following the fatal shooting of Michael Brown by a police officer.