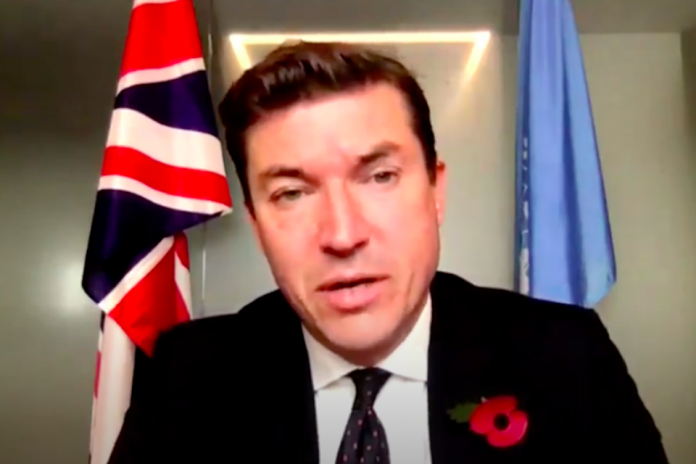 Many thanks, Madam President. And thank you also to Mr Griffiths, Mr Lowcock and Mr Beasley. I think the briefings left us in no doubt as to the scale of the humanitarian crisis, the human crisis in Yemen and the urgent need to find progress in terms of a political solution.

So, to Mr Griffiths first, the United Kingdom fully supports your efforts to progress the political solution. The recent success that you described in securing the exchange of over 1000 prisoners does demonstrate that face-to-face dialogue can indeed lead to positive outcomes. So we encourage you, in doing what you can, to bring the sides together to finalise the Joint Declaration. It’s clear from everything we’ve heard today that only an end to the violence can help us bring enduring humanitarian relief and hope to the people of Yemen.

But as you say, Mr Griffiths, we continue to see spikes in violence – in particular the Houthis continue to launch persistent missiles and drone attacks at Saudi Arabia and to pursue further territorial gains in Yemen; casting doubt over the Houthis’ commitment to peace. The recent arrival of a senior IRGC envoy in Sana’a underlines this point and highlights Iran’s destabilising role in the Yemen conflict. So we urge the Houthis to refrain from such behaviour and instead, to place their efforts into dialogue.

Another necessary step is the implementation of the Riyadh Agreement and so the United Kingdom calls on the parties to rapidly form an inclusive cabinet and implement the necessary military reforms.

But we heard today about the dire humanitarian situation. Several sets of data were released last week, and it’s clear that the risk of famine is growing. But as Mr Lowcock has said, this is not about data or statistics for the people and children of Yemen, but a grim human reality. The Integrated Food Security Phase Classification’s latest acute malnutrition analysis for parts of southern Yemen, as we’ve heard, predicts that malnutrition in the south is soon expected to reach its highest levels since the conflict began.

We know how bad it’s been. It’s getting worse. By the end of 2020, the number of children suffering acute malnutrition will grow by 10 percent – risking the fate described just now by Mr Lowcock. And as we heard from Mr Beasley, the World Food Programme has also assessed that food security is worsening faster than expected.

With 40 percent of households across the country now not having enough to eat, the dire picture makes swift action now, before it’s too late, all the more important, particularly on the economy, humanitarian funding and humanitarian access.

On the economy, urgent action is needed to ensure the availability and affordability of food, as we’ve heard. At present, Yemen’s economic problems are escalating and driving up the prices of basic goods, such as food and fuel and putting additional pressure on the humanitarian response. The Yemeni Riyal has reached, as we’ve again heard today, record lows against the dollar and the Central Bank of Yemen’s hard currency reserves are effectively exhausted. The Government of Yemen must set out a realistic and transparent budget whilst taking steps to avoid further inflation. External support in the form of hard currency to the Central Bank of Yemen is also urgently needed so that food importers can continue to bring food into their country.

The UN-led humanitarian response, again, as we heard today, remains vastly underfunded, further driving that risk of famine. Only 43 percent of the UN’s $3.3 billion appeal has been received to date. And as a result, 12 of the UN’s 38 major programmes in Yemen have already closed or been majorly scaled back this year. If no further funding is received, more will close, denying life-saving assistance to those long-suffering Yemeni children and people.

So it’s critical that donors disperse promptly and consider additional funding for 2020. Donors must also commit new funds at the start of 2021 and not wait for a pledging conference. For our own part, the United Kingdom has already disbursed 81 percent of our 200 million pound commitment for this financial year.

Shockingly, in this context, severe humanitarian access constraints, particularly in the Houthi-controlled north, continue to hamper the humanitarian response. Aid and humanitarian workers must be able to reach those in need, otherwise vulnerable Yemenis will needlessly die. We also condemn any attacks on aid workers, including the two recent incidents in Aden.

A senior officials donor meeting is taking place this week, hosted by the European Commission in Sweden. It is vital that we use this meeting to send a clear message that we will not tolerate constraints on the distribution of lifesaving assistance.

I’m grateful to the briefers for their updates on the SAFER oil tanker. Last month UNOPS and the Houthis agreed in principle to an assessment mission to secure that tanker. But as Mr Griffiths has said, this issue is progressing slower than urgency requires. We understand the revised statement of works is due to be submitted shortly but we encourage the UN to accelerate this work and urge the Houthis to agree to the revised plan so work can begin as soon as possible.

Madam President, what we have heard today is an urgent call to action from the leadership of the UN humanitarian organisations. We need to heed their grave warnings with immediate action. Thank you.