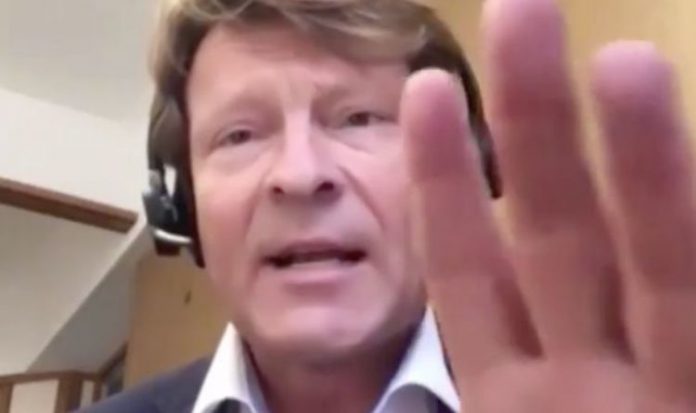 The row began when Sky News host Adam Boulton confronted Richard Tice over Nigel Farage’s latest attempt to rebrand his Brexit Party, as he applied to the electoral committee to rename the party Reform UK. Mr Boulton asked whether the party was going to be a “real party” this time around, suggesting they failed to disclose the Brexit Party’s financial accounts.

Asked whether he or Mr Farage had made personal financial gains from the party, Mr Tice replied: “I’m delighted to confirm neither of us has had any remuneration whatsoever.”

Urged to publish the “accounts of the party in full”, Mr Tice blasted: “Look, the accounts are with the electoral commission, as it’s the norm with any political party.

“The suggestion you’re making is frankly defamatory and libellous and you should be ashamed of yourself.”

The Brexit Party chairman was then cut off from the interview.

The Brexit Party contested 275 seats and took 2 percent of votes but did not succeed in electing an MP in the 2019 general election.

It will now broaden its agenda to include coronavirus and seek “reform” in other areas.

Party leader Nigel Farage said: “As promised, we continue to keep a very close eye on the Government’s trade negotiations with the EU, to ensure a proper Brexit.

“Further reform in many other areas is also vital for our nation’s future.”

Prime Minister Boris Johnson on Saturday ordered England back into a national lockdown from Thursday morning after the United Kingdom passed the milestone of one million COVID-19 cases and a second wave of infections threatened to overwhelm the health service.

The UK, which has the biggest official death toll in Europe from COVID-19, is grappling with more than 20,000 new coronavirus cases a day and scientists have warned the “worst case” scenario of 80,000 dead could be exceeded.

Mr Farage, a former commodities trader, has transformed British politics over the past decade by poaching Conservative voters to force a succession of prime ministers toward ever-tougher positions on Europe.