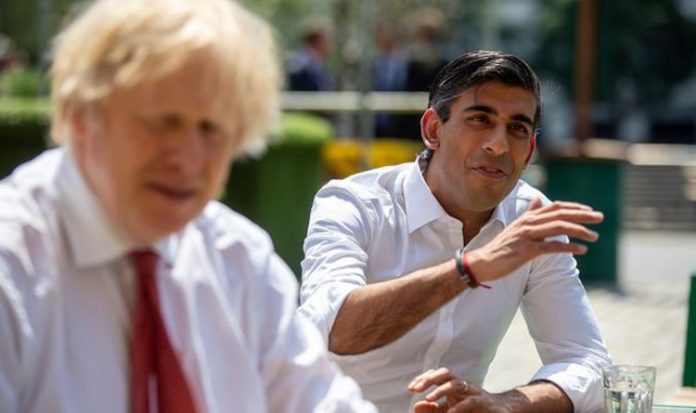 The Chancellor will deliver the next Budget on Wednesday and the expectations are as high as the stakes. Many are hoping Mr Sunak will use it to give Britain a boost in the spring as lockdown rules are lifted and families and businesses look to recover from the pandemic. And pubs could be one of the big winners, as Prime Minister Boris Johnson confirmed this week.

When asked during PMQs if the UK can “do as it pleases with beer duty” post-Brexit, Mr Johnson said: “There is just such a review being carried out after consulting pub owners and brewers and others, and I know that the Chancellor is looking very closely at the findings.”

While Britain was a member of the EU, Brussels’ red tape was stopping the Government extending its reduced VAT rate for the struggling hospitality sector to alcohol sales.

According to the British Beer and Pub Association (BBPA), pubs and brewers could be given a £130million boost if the Government takes advantage of its post-Brexit freedom.

Chief executive Emma McClarkin said: “The existing VAT cut on food and soft drinks does nothing to help those pubs who rely on beer sales for their revenues, and it’s important to remember that seven in ten of all alcoholic drinks sold in pubs are beer.

“Once the UK is no longer bound by EU structures on tax the Government can take the simple step of extending the cut to cover beer sold in pubs as well.

“This would be a huge boost to those pubs that have been singled out for extraordinarily harsh treatment under lockdowns and tier systems.”

She added: “If we want there to be pubs for us to come back to once this crisis has passed they need help – and they need it urgently.

“Cutting VAT on beer sold in pubs is a small cost for the Government but would be a major boost to our brewers and pubs to the tune of £130million, just when they need it most.”

Mr Sunak cut VAT from 20 percent to five percent for the hospitality sector until March 31 as part of a package of measures to support some of the hardest hit businesses during the coronavirus crisis.

It only covers food and non-alcoholic drinks, accommodation and admission to tourist attractions.

The BBPA wants the reduction to be extended until 2022 and applied to all drinks sold in pubs.

A group of MPs is also urging him to take advantage of the new post-Brexit freedom.

They have written to the Chancellor arguing a cut in beer duty would support pubs which are struggling to survive the “devastating” impact of the pandemic.

The MPs’ letter, co-ordinated by Durham North West MP Richard Holden, claimed that some pubs, many of them “long-standing community assets”, could be forced to shut down without further help.

Former Business Secretary Andrea Leadsom said in December: “The Government will have the freedom after the end of the transition period to help businesses much more flexibly, including through targeted cuts in VAT that would not be possible if we were still in the EU.

“I think the Chancellor will be looking carefully at how he can help turnaround our hard hit hospitality sector.”

Conservative MP Andrew Bridgen added: “These are just a sample of the measures a newly sovereign and independent UK could do to revitalise our pubs and hospitality industry once we are finally out of the clutches and control of the EU

“I think we should all drink to that.”

However, the charity Alcohol Change UK said the costs to society of drinking “far outweighs” the tax paid on it.

The charity’s Dr Richard Piper said deaths caused by drinking last year were the highest since records began in 2001, and that reducing the tax on beer would be the wrong move.

He told the BBC: “Alcohol duties fall on alcohol producers – not pubs – and most alcohol sales are from a small number of multinational corporations, some of the largest and most profitable companies on the planet.

“Their products create harm, so it is quite right that they pay for this harm.”

In last March’s Budget, the Chancellor scrapped a planned increase in duty on beer and spirits.

However, the group of MPs said a pint of beer in the UK was still taxed at a rate 11 times higher than the equivalent in Germany or Spain.

British people pay 54p in duty on a pint of five percent beer, while in Spain and Germany the equivalent duty would be just 5p.

Mr Piper at Alcohol Change UK said a better strategy would be to level the playing field between pubs and shops selling alcohol for consumption at home.

He said: “During the pandemic, while hospitality venues have suffered, alcohol sales in supermarkets have boomed.

“A smart UK policy would be to increase alcohol duties on cut-price supermarket alcohol, without increasing it in pubs and bars.

“That’s a double win: fairer competition for pubs, bars and other hospitality venues, and an overall increase in tax revenues to start to off-set the cost of alcohol to society.”