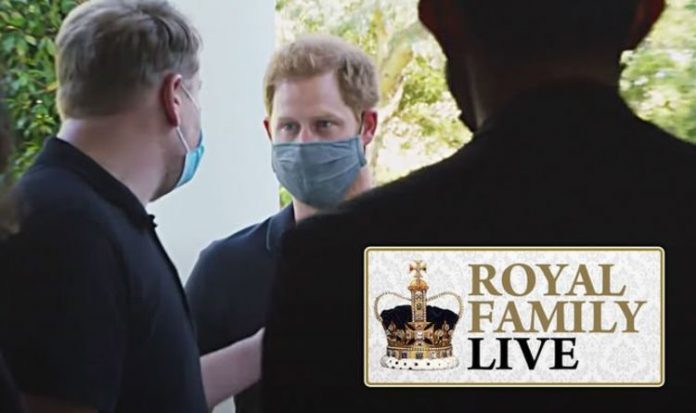 Prince Harry drinks tea on a bus with James Corden

Prince Harry laid bare his feelings for Megxit almost one year after he officially relinquished his role as full-time working royal, in an episode of The Late Late Show with James Corden. The Duke of Sussex explained he never wanted to walk away from the Royal Family and said “it was stepping back rather than stepping down”.

Speaking to TV host and friend of the Sussexes Mr Corden, Harry said: “As far as I am concerned, whatever decisions are made on that side, I will never walk away, I will always be contributing.

The Duke said the decision to move abroad with his wife Meghan Markle and son Archie came due to the pressure of constantly being under the spotlight.

He said the media fascination in his family had created a “difficult environment” and was damaging his mental health.

He said he needed to get “my family out of here”, before adding: “But we never walked away”.

Royal Family news: Harry opened up on the reason why he decided to step back as working royal (Image: THE LATE LATE SHOW WITH JAMES CORDEN)

However, they matched the statement issued by the Duke and Duchess of Sussex in the wake of the Queen’s announcement on their royal and military patronages.

After the monarch revealed she had asked Meghan and Harry to relinquish their links to associations with a royal link, a spokesman for the Sussexes said: “As evidenced by their work over the past year, The Duke and Duchess of Sussex remain committed to their duty and service to the UK and around the world, and have offered their continued support to the organisations they have represented regardless of official role.

Prince Harry and Meghan officially stepped down as senior royals at the end of March last year, a few days after they landed in California to start their new lives.

The Duke and Duchess of Sussex have since appeared in a few summits held remotely to speak about causes close to their heart and have remained in touch with their patronages and organisations they support.

They also stepped out of their home to carry out charity work.

But, before appearing on the Late Late Show, they had yet to make a TV appearance to speak about their personal lives.

This episode of Mr Corden show was filmed earlier this month, when the Duke and the TV host were spotted on the open-air double-decker with a camera crew.

Next month, Prince Harry and Meghan are to speak more about their private life and hopes for the future as they appear in a 90-minute Primetime Special on CBS with Oprah Winfrey.

SCROLL BELOW FOR LIVE UPDATES ON THE ROYAL FAMILY

Speaking on an open-top double-decker bus tour in LA, the Duke told Mr Corden: “My son is now over a year and a half, he is hysterical, he’s got the most amazing personality, he’s already putting two, three words together, he’s already singing songs.

“Archie literally wakes up in the morning and says ‘waffle’.”

8.50am update: Prince Harry lifts lid on Meghan Markle whirlwind romance – ‘We went from 0 to 60’

Prince Harry and Meghan Markle went from “went from zero to 60” in the early days of their romance, the Duke has admitted.

The Duke of Sussex opened up about the start of their relationship as he joined James Corden on The Late Late Show.

Harry insisted dating as a member of the Royal Family is “flipped upside down”.

The Duke told Cordon early dates are at home and only when they are a couple do they go out in public.

Harry said: “We got to spend an enormous amount of time just the two of us.

“There were no distractions, and that was great, it was an amazing thing.

“We went from zero to 60 in the first two months.”

8.06am update: Prince Harry speaks about what his life after Megxit will be like

Prince Harry was asked by James Corden during his Late Late Show what he expects life to be like now that he has relocated to California and what he is excited for it to be after Megxit once lockdown is over.

He answered: “I have no idea, a slightly different version but a continuation of what we were doing back in the UK anyway.