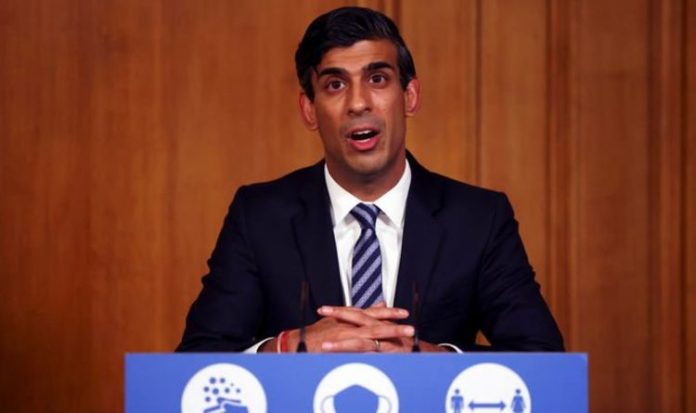 Setting out spending plans for the next year, the Chancellor is to unveil a package of measures to help workers made redundant in the pandemic find new careers as soon as possible. He will also promise tens of billions of pounds in long-term investment projects to kickstart economic growth. Ahead of today’s statement to MPs, Mr Sunak said: “My number one priority is to protect jobs and livelihoods across the UK.

“This Spending Review will ensure hundreds of thousands of jobs are supported and protected in the acute phase of this crisis and beyond, with a multi-billion package of investment to ensure that no one is left without hope or opportunity.”

His ideas include a £2.9billion Restart scheme to help one million unemployed people with job searches over the next three years. Those out of work for more than a year will be offered regular, intensive job-hunting support tailored to individual needs.

Mr Sunak will also promise £1.4billion to expand the capacity of Jobcentre Plus offices, ready for a surge in demand as a result of a downturn triggered by the pandemic lockdown announcements.

The sums are part of a new multi-billion pound budget agreed for the Department for Work and Pensions in the Whitehall financial review.

The Chancellor will also approve £1.6billion for his Kickstart scheme in 2021/22. It aims to create six-month work experience placements for around 250,000 young people.

An apprenticeship hiring incentive that was launched in August will be extended to March 31 next year, offering employers up to £2,000 for every youngster they take on.

Other measures to help employment to be announced today will include £375million for help to train workers in new skills.

Out of that, £138million will go to fund the Government’s Lifetime Skills Guarantee training initiative and £127million will support skills training under the Chancellor’s Plan for Jobs announced earlier this year.

Mr Sunak’s plans for capital investment to be announced today include building homes, roads, railways and cycle lanes which will help create hundreds of thousands of job opportunities around the country.

His come on top of more than £200billion in Treasury initiatives this year to support employment through the health crisis.

This includes paying towards the wages of nearly 10million furloughed employees as well as grants for around 2.6milion self-employed workers.

Matthew Fell, policy director at the Confederation of British Industry, said the Chancellor was right to focus on job creation as the economy looked to recover in 2021.

“Covid-19 has swept away many job opportunities, for young people in particular,” he said.

“The scarring effects of long-term unemployment are all too real, so the sooner more people can get back into work the better.”

Claire Walker, co-executive director of policy at the British Chambers of Commerce, said: “The impact of coronavirus on firms’ ability to create and retain jobs has been significant.

“To help business communities rebuild, it is vital that the Government supports them to retrain and re-skill the UK workforce.”

A Tesco spokesman said: “At this challenging time for businesses we welcome this package for jobs and the boost for training from the Chancellor.

“We welcomed 1,000 Kickstarters to our business earlier this month and are also pleased to see initiatives such as the Lifetime Skills Guarantee which will help us to ensure that our colleagues, new and old, are able to upskill and continue their career development.”

In budget settlements for other Whitehall departments, the Chancellor will also promise a £275million boost to increase capacity in courts to tackle the impact of the pandemic and support the Government’s crackdown on crime.

He is also to confirm tens of millions of pounds for a Counter Terrorism Operations Centre to fight emerging threats to the UK.

At the same time Mr Sunak is expected to signal a series of budget cuts to some departments as he begins setting a course to reduce the huge Treasury borrowing during the pandemic.

Officials are understood to be preparing legislation to allow a cut to overseas development funding despite a law committing the Government to spending 0.7 per cent of annual GDP on aid.

Reducing it is likely to anger opposition MPs as well as some Tory backbenchers.

Tens of millions of pounds have been pledged to a counter Terrorism Operations Centre (Image: Getty)

Labour’s Preet Kaur Gill, shadow international development secretary, said: “During this pandemic the Government have handed over millions of pounds of UK taxpayers’ money to its friends yet are now turning their backs on the world’s poorest.

“This move will damage the UK’s reputation around the world and will only show our allies and detractors that Britain under Boris Johnson is no longer interested in fulfilling our responsibilities or leading on the global stage.

“Labour are committed to spending 0.7 per cent of gross national income on aid to tackle global poverty and injustice, and will oppose any attempt from this Government to damage this country’s reputation by breaking that commitment,” she added.

Mr Sunak is also expected to announce curbs on pay rises for millions of public sector workers. Some Whitehall sources have indicated that he could scale back plans for a rise in the National Living Wage next April from five per cent to two per cent.