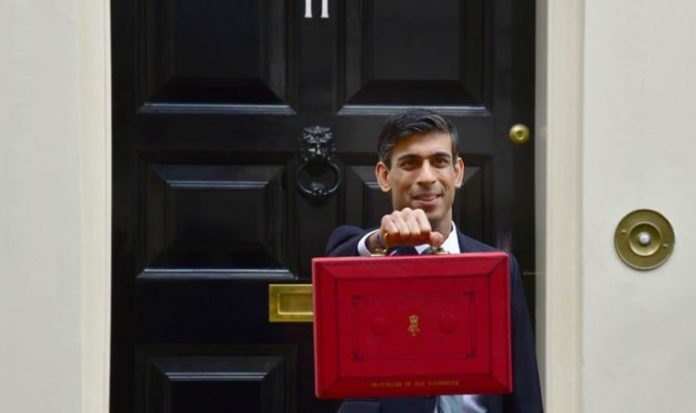 The Chancellor and Prime Minister Boris Johnson risk alienating recently recruited Conservative voters should they implement austerity measures in the March Budget, Express.co.uk was told. Mr Sunak’s announcement on March 3 is tipped to be one of the most closely watched Budgets in a generation. It will set out how the Government plans to balance the books and start on the road to economic recovery following the coronavirus pandemic.

Millions of organisations and workers have been kept afloat for nearly a year, as nationwide lockdowns forced businesses to close.

Over the course of 2020, Mr Johnson and his cabinet spent £280billion on measures to fight COVID-19 and its impact on the economy.

This included the generous furlough scheme, securing vaccines and PPE, as well as the much debated and expensive Test and Trace service – alone costing more than £22bn.

Mr Sunak has now been warned against holding back on state aid and public spending as it risks turning millions of voters who chose blue for the first time in the 2019 general election.

Rishi Sunak: The Chancellor is set to announce the March Budget next week (Image: GETTY)

Budget: Little has escaped No 11 about the Budget (Image: GETTY)

Many of these people can be found in the so-called Red Wall – a band of working class seats in the north of England – as well as in the Midlands and Wales.

The communities, according to Statista, receive the highest concentration of state spending per household.

Paul Embery, a leading trade unionist and Labour member told Express.co.uk that while it was likely the Budget will include “austerity” measures, Mr Johnson and Mr Sunak must think before they squeeze communities already squeezed by ten years of reduced funding.

He said: “The Tories, purely from an electoral point of view, probably need to think hard about another round of austerity, and what that’s going to do in terms of their support in the Red Wall seats they’ve captured.

JUST IN: Macron tried to freeze UK out of £350bn market

Westminster: Sunak pictured after the Budget in 2020 (Image: GETTY)

“People there will turn against them quite quickly if they impose that austerity.”

Mr Embery said austerity in the face of Britain’s worst financial crisis for 300 years would be the nail in the coffin for millions.

He added: “I think even on its own terms it’s the worst possible response to an economic crisis.

“We’ve seen in the past that if you cut and slash at a time when everyone else is doing it, individual households and businesses, all you do is prolong the problem, you choke off recovery and you send the economy further into a downwards spiral.”

Rishi Sunak Spring Budget: Bitcoin & cryptocurrencies may be targeted [ANALYSIS]
Biden could pull rug from under UK’s Brexit dream as US is ‘ruthless’  [INSIGHT]
Drakeford in battle for Wales as Labour group bids to break up UK [REPORT]

Boris Johnson: The PM was warned of alienating the voters he won over in the 2019 general election (Image: GETTY)

Spending: Corporation and pension tax are believed to be among Sunak’s hit-list (Image: GETTY)

The Government also has on its hands the controversy surrounding its use of taxpayer money in awarding contracts to Tory-affiliated individuals and groups.

Matt Hancock, the Health Secretary, was last week found to have acted unlawfully by not publishing all of the Government’s contracts within 30 days of them being awarded – with calls for his resignation growing.

While little has been hinted at what might come in the Budget, Mr Sunak earlier this week said the stamp duty holiday – introduced in July last year – would be extended to June.

According to The Times, the Chancellor is also plotting a “stealth tax” on wealthy peoples’ pensions.

He is tipped to freeze the lifetime allowance – the amount you can save towards your pension before incurring tax charges – at slightly over £1million.

His concern came as reports suggested he was readying to raise corporation tax in a bid to generate an extra £12bn in revenue.

It is believed the tax will hike from 19 percent to 23 percent.

According to a report in the i newspaper, the Chancellor will gloss over any talk or pay rises for NHS staff.

Pressure has mounted on the Government to increase the wages of health workers following their momentous efforts in tackling COVID-19 in hospitals up and down the country.

Instead, Mr Sunak is thought to be waiting to make a decision until the NHS Pay Review Body’s report is released in May.

Unions representing NHS staff say waiting for this could mean it is months before any decision on increased wages is made.