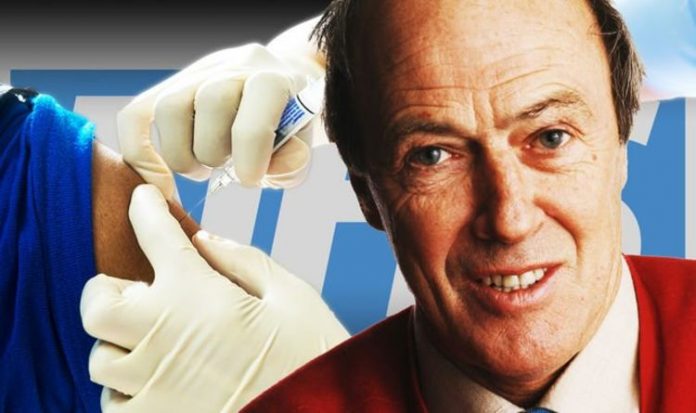 History was made after Margaret Keenan became the world’s first person to be given the celebrated Pfizer/BioNTech coronavirus vaccine, with health officials in the UK hailing the moment as a game-changer in the battle against Covid-19. Following the 90-year-old’s jab, NHS officials claimed “thousands of vaccinations” had since been carried out across the nation. Figures such as Health Secretary Matt Hancock claimed the breakthrough was a “tribute to scientific endeavour”, adding: “It marks the start of the fightback against our common enemy, the coronavirus.”

Nicola Sturgeon, Scotland’s First Minister, also said people should “allow themselves a smile” but warned “we must not drop our guard” as the Covid-19 death toll rose to more than 62,000.

Talk remains ongoing as to which demographics in the UK will be in line for the vaccine, with over-50s expected to be offered a jab during the first phase of the vaccination rollout.

And Dahl, the children’s author behind novels such as Matilda, Charlie and the Chocolate Factory and Fantastic Mr Fox, once waded into the vaccine debate after thousands of children contracted measles encephalitis in the Sixties.

He recalled in a devastating 1986 essay how he lost his daughter Olivia to measles in 1962, and what happened during the final moments before she died.

The author, who also helped write film screenplays including James Bond hit You Only Live Twice, said he could “remember reading to Olivia in bed and not feeling alarmed” about the illness she contracted when seven years old.

But he continued: “Then one morning, when she was well on the road to recovery, I was sitting on her bed showing her how to fashion little animals out of coloured pipe-cleaners, and when it came to her turn to make one herself, I noticed that her fingers and her mind were not working together and she couldn’t do anything.

“‘Are you feeling alright?’ I asked her. ‘I feel all sleepy,’ she said. In an hour, she was unconscious.

“In twelve hours she was dead.”

READ  Managing the pandemic in prisons

In the tragic essay, Dahl explained he dedicated two of his books to his daughter – James and the Giant Peach and the BFG, adding: “You will see her name at the beginning of each of these books.

“And I know how happy she would be if only she could know that her death had helped to save a good deal of illness and death among other children.”

Using his literary influence, Dahl then demanded that children get vaccinated against the disease,

In the letter, Dahl described it as “almost a crime to allow your child to go unimmunised”.

According to the Centre for Disease Control and Prevention, measles encephalitis is a serious condition that sees around one in five unvaccinated people in the US hospitalised.

It also explained that “nearly one to three of every 1,000 children who become infected with measles will die from respiratory and neurologic complications”.

Dahl’s plea came amid public insecurity over vaccinations, which echoes similar concerns in 2020 regarding the coronavirus jab.

This is comparable to another time in history, when the world became ravaged by polio and a new vaccine was introduced to the UK in the Fifties.

Panic surrounding the vaccine, after it emerged some children in the US contracted polio as a result of taking the drug.

But when the drug was rolled out in the UK, the Queen stoked the public’s confidence in it by ensuring her two children, Prince Charles and Princess Anne, were given the vaccine.

As a result, public mood thawed and millions of others went on to take the drug, which the NHS said helped cases “fall dramatically”.

This week, Dahl’s family issued an apology antisemitic comments the author made before he died in 1990.