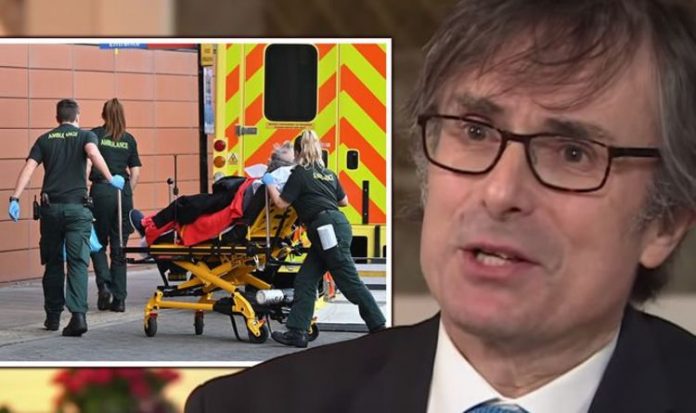 Mr Peston said on Twitter ahead of a major address this evening: “PM will be directly addressing the nation. It won’t be a press conference. Tier 4 restrictions will be imposed everywhere. Schools closed. No more team games in parks. But outdoor exercise will still be allowed.”

It comes after ITV’s Political Editor said AstraZeneca, the pharmaceutical company behind the Oxford coronavirus vaccine, should be able to supply the NHS with 2 million doses every week by mid-January.

Healthcare workers are currently rolling out an initial 500,000 doses of the jab.

The first person to receive the Oxford vaccine was injected this morning.

Other doses will then be sent to hundreds of GP-led services and care homes across the UK later in the week, according to the Department of Health and Social Care.

AstraZeneca made just half-a-million doses of the vaccine available while the drug was pending approval.

But the company is quickly ramping up its capacity, Mr Peston said.

He wrote on Twitter: “AstraZeneca expects to be able to supply 2m doses of the Oxford/AZ vaccine to the NHS every week by the second half of January.

“This week the number is ‘only’ 500,000 because the company kept the vaccine in ‘drug substance’ form pending approval.

“But AZ is ramping up fast and filling vials at a rapid rate.”

He added: “It is realistic to expect a massive vaccination programme to be well into its stride within a fortnight, so long as the NHS and the government – led on this by @nadhimzahawi – sort the logistics.

He is now looking forward to celebrating his 48th wedding anniversary in February.

Mr Pinker, who describes himself as Oxford born and bred, said: “I am so pleased to be getting the Covid vaccine today and really proud that it is one that was invented in Oxford.

“The nurses, doctors and staff today have all been brilliant and I can now really look forward to celebrating my 48th wedding anniversary with my wife Shirley later this year.”

He tweeted: “Delighted that today we roll out the UniofOxford/AstraZeneca vaccine across the whole UK.

“It’s a vital step in our fight against this pandemic. This is a national mission. Thank you to everyone involved.”

The UK has secured 100 million doses of the Oxford/AstraZeneca vaccine – enough for most of the population.