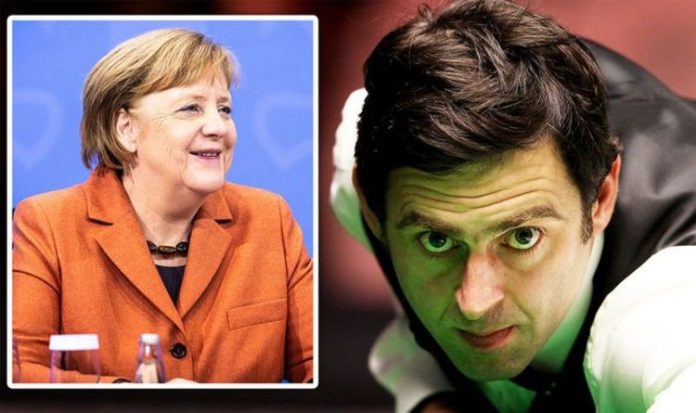 The six-time world champion is known for his unpredictable temperament and outspoken views, having received many warnings and sanctions from snooker’s governing body for his actions over the years. But as the UK warns there will be no post-Brexit trade deal with the EU unless there is a “substantial shift” from Brussels, the Rocket’s controversial views on the historic decision to leave the bloc have resurfaced. Just one day after the EU referendum, O’Sullivan tweeted: “Time to leave the UK, I think this place is falling apart at the seams, might move to Germany.”

But fans did not appear to agree with him.

One reply read: “Ronnie, I love you, but farewell.”

And a third poked: “Bye-bye, nice to have our country back.”

Born in Wordsley in the West Midlands, O’Sullivan grew up in the Manor Road area of Chigwell, Essex – where he still lives.

While he might not be leaving the UK just yet, O’Sullivan appears to have remained stubborn with his forecast that Britain will be snookered without the EU.

And in 2019 he seemed to give a broader explanation as to why.

He wrote on Twitter: “I have a feeling Brexit and its chaos is a consequence of years of lies from MPs, and it’s lack of care for the north of England.

“I imagine the whole world is looking at the UK and thinking, ‘you are bang in trouble now.’”

While some commentators appeared to agree with his remarks, many quickly shot them down.

One wrote: “Stick to snooker.”

Another added: “We will be leaving, we can either get on with it or keep moaning about how bad it will be.”

A third pointed out: “A lot of people down south also voted to leave, it’s not as simple as north versus south.”

It is understood there is likely to be a decision before Christmas on whether or not a Brexit deal can be reached.

The UK and EU are still far apart on Brexit (Image: GETTY)

The UK and the EU have been in negotiations about how many years it will take to phase in new fisheries arrangements.

If no agreement is reached, the UK and EU will trade on World Trade Organisation (WTO) rules on January 1.

A Government source told the BBC: “We need to get any deal right and based on terms which respect what the British people voted for.

“Unfortunately, the EU is still struggling to get the flexibility needed from member states and are continuing to make demands that are incompatible with our independence.

“We cannot accept a deal that doesn’t leave us in control of our own laws or waters.

Tyson Fury has been tipped to win (Image: GETTY)

“We’re continuing to try every possible path to an agreement, but without a substantial shift from the [European] Commission we will be leaving on WTO terms on December 31.”

It is unlikely O’Sullivan will be thinking about Brexit tonight, as he is in with a chance of winning the BBC Sports Personality of the Year Award (SPOTY).

He became the first snooker player to be nominated for the award since Stephen Hendry in 1990.

But while O’Sullivan was “excited to get the nomination” and hoped it would “help snooker grow in popularity,” he did not back himself to win.

Ronnie O’Sullivan reveals he uses a diary in 2019

Asked who his pick would be, O’Sullivan said: “I lived in Liverpool so I have a great love for Liverpool and I know how much the football team means to the fans and everyone in Liverpool.

“For them to win the Premier League last year and the Champions League the year before, [Jurgen] Klopp has done an unbelievable job, and it would be great for Henderson.

“But for me, Tyson Fury is the standout.

“It’s the gladiator sport and he is the real Rocky. He’s a proper fighter’s fighter and he’s the superstar for me.”

Voting will be open to the public during the Sports Personality programme on BBC One at 8pm.