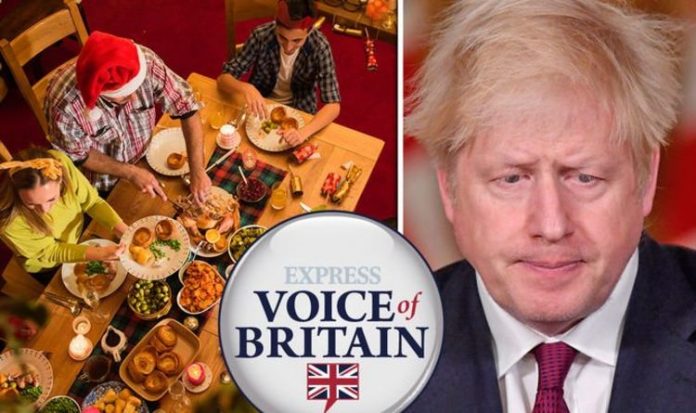 Boris Johnson rowed back on his plans to relax coronavirus rules over the Christmas period yesterday, banning gatherings for those in Tier 4 areas and limiting celebrations to just Christmas Day for the rest of the country. In response to the shock announcement, Express.co.uk asked its readers if they will change their plans for the festive period. The poll, carried out from 5pm on December 19 to 1pm on December 20, asked: “With less than a week’s notice, will you change Christmas plans?”

The majority of the 5,822 respondents said they would be sticking with existing plans, with 54 percent (3,106 people) voting “no”.

Readers then took to the comments to explain why they were refusing to alter their Christmas plans. One person said: “I’ll be doing exactly what I planned to do. This announcement does not make me change my plans.”

Another user wrote: “Nope, Xmas day will go ahead as previously planned, we look after our grandchildren twice a week, so we’ll be meeting exactly the same people/children as we do already (legally). Nothing will change here.”

A third said: “Not changing my plans for billy bunter Boris.”

Other users also reacted with fury to the Government’s announcement, with one person writing: “It’s none of the government’s business what I do at Xmas. Shove it, Johnson, Whitty, Hancock et al.”Another person said: “We made plans to stay home alone Xmas day, go to the kids on Boxing Day, sorry Boris our day out is Boxing day, if you catch me you can try to fine me, I won’t pay.

“If you catch me I won’t stop or turn around, so you best get the cells ready for me and many others!”

But several users said they will be abiding by the change of rules and had cancelled plans to mix with other households.

But now Mr Johnson said those in the new Tier 4, which includes London, Kent, Essex, Surrey and Bedfordshire, will not be allowed to mix with any other households. People in other tiers will also face disruption, as the “Christmas bubble” policy now only applies to Christmas Day.

Mr Johnson said he was introducing the new restrictions “with a very heavy heart”.