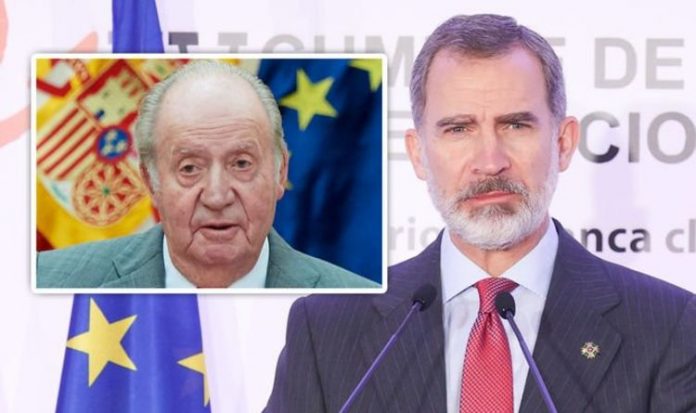 A representative from left-wing Spanish party Unidas Podemos, governing alongside the PSOE party, has called on the monarch to call out his father as “bare minimum”. Juan Carlos fled Spain earlier this year after he was alleged to have received millions of euros from Saudi Arabia’s late King Abdullah.

Gerardo Pisarello, MP and representative for Unidas Podemos, said King Felipe must address the controversy, otherwise the monarchy will have “lost its reason for being”.

He said a mention of the accusations against Juan Carlos is “the minimum that the Spanish people expect” from the Spanish King.

Mr Pisarello also said he should say he “demands a thorough and complete investigation” into Juan Carlos and “to other members of the Royal Family”.

He continued to add Felipe should “launch a clear message that… no member of the Royal Family received privileged treatment”.

Mr Pisarello then continued to say silence on the matter from Felipe would reflect poorly on the monarchy.

He added: “To minimize what has happened or to pretend that nothing has happened this year would be a sign of weakness of the monarchy.”

The representative ended his comments by saying failure to address the scandal would show “an institution incapable of connecting with the demands of part of the population”, therefore proving the monarchy would have lost its reason for being”.

Unidas Podemos have campaigned for years to abolish the Royal Family, calling for Spain to become a republic.

Juan Carlos’ lawyer claimed on December 9 the former King had made a voluntary payment of more than €678,000 to Spanish tax authorities.

But he has ruled out returning to Spain from Abu Dhabi for the Christmas holidays, citing illness and fears concerning coronavirus.

Mr José Laborda, former senate speaker, added: “The logical thing would be an agreement between Felipe VI, the royal family and the government.”

Last year, Felipe used his annual Christmas Eve speech to call for unity after a turbulent election in November.

He said: “I said at the beginning that these are not easy times; but I also believe that this is exactly why, more than ever, we must have faith in ourselves and in Spain, which has always made it through when we face the future with responsibility, generosity and rigour; with determination, but also calmly and thoughtfully. And we have plenty of reasons to have faith.

“Progress in a country depends largely on the character of its citizens, the strength of its society, and how well its government functions.”

The King also paid tribute to those affected by floods in Spain, and referenced Catalonia’s lack of trust in government institutions.